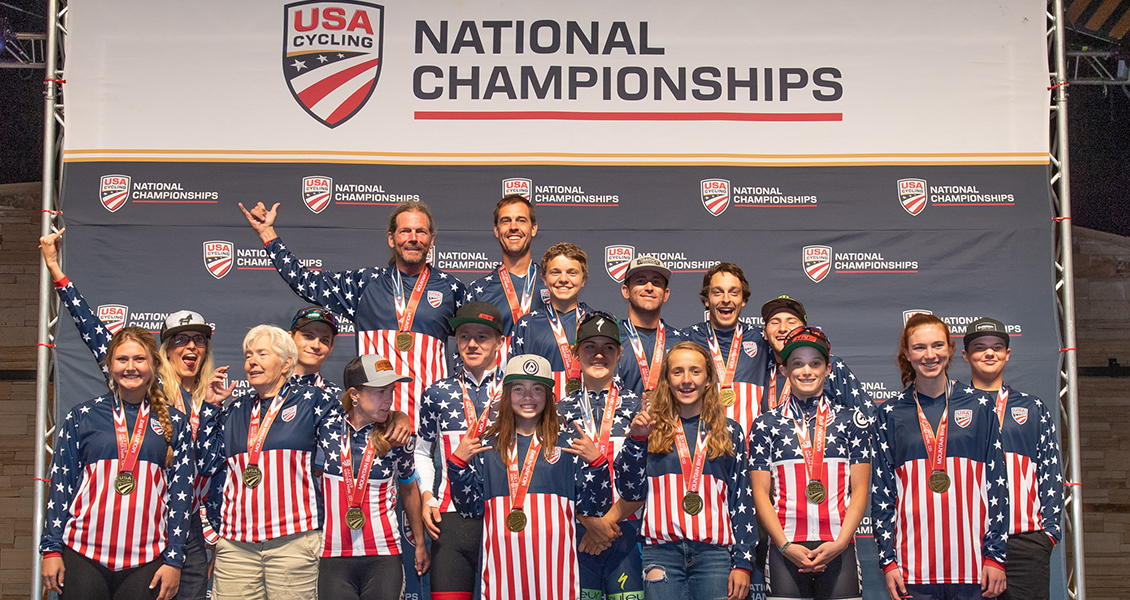 In the Women’s Race, Woodruff immediately went off the front joined by an unexpected competitor in U.S. Pro National Road Race Champion, Ruth Winder (Boulder, Colo.; Trek-Segafredo) quickly gaining a 35 second gap on the field through the first lap. A crash in the middle of the second lap caused Winder to withdraw from the race but Woodruff pushed on. She crossed the line at 1:47.01, one minute and 16 seconds faster than silver medalist Evelyn Dong (Herber City, Utah). Two-Time Olympian Lea Davison (Jericho, Vt.; Sho-Air TWENTY20) rounded out the podium to take the bronze medal.

“I went to the front and just set a sustained pace. There was kind of a big group there, and I wanted to break it up a little bit, and whittle it down to just myself and someone else if possible, or hopefully just myself. I just didn’t want that big of a group going into the last lap,” Swenson said about the big move he and Howard Grotts (Durango, Colo.; Specialized) made with two laps to go, pulling away from a group of six. Swenson would finish in a time of 1:50:26, and Grotts would finish 29-seconds behind him to take the second step of the podium. In third was Russell Finterwald (Colorado Springs, Colo.; Clif Pro Team) who finished in a time of 1:52:08.

In the U23 Women, Savilia Blunk (Inverness, Calif.; Sho-Air TWENTY20) would lead for the majority of the race, but a flat tire in the last lap would give Kelsey Urban (Kentfield, Calif.; Rouleur Devo p/b DNA Cycling) the opportunity to pass Blunk and take the title in a time of 1:21:38. Blunk would finish second only 29 seconds behind Urban.

Jerry Dufour (Birmingham, Ala.; Bear Development Team) would win the U23 Men’s national title. “It was good, it was interesting,” said Dufour about the race, “I realized there that the riders with us on the third lap were probably going to finish until the end. It was basically three to four of us going into the last lap. It was a drag race up the mountain for nine-and-a-half minutes. I was able to get on the front for the decent, I was able to control the pace.” Dufour would be out Henry Nadell (Carbondale, Colo.; Construction Zone Racing) in a sprint finish for the title.

In the downhill side, Teagan Heap (Boulder City, Nev.) would win the 11-12 Junior Women’s race, by almost two minutes. Her time was fast enough that she would have placed second in the 13-14 Junior Women’s race. The top four of the 15-16 Junior Men were separated by less than seven-seconds, with Christopher Grice (Brevard, N.C.) coming out on top in a time of 5:31.95. Christopher Canfield (Layton, Utah) would win the 40-44 Master Men’s event in a time of 5:27.43, and set the fast time of the day for the amateur contesting the Pro DH course.

Racing finishes up on Sunday with the finals of the 17-18 & Pro Downhill events and all short track events.

Complete Results for the day’s races can be found here: https://legacy.usacycling.org/results/index.php?year=2019&id=21

Visit USACycling.org for more information on the athletes, events and membership programs.