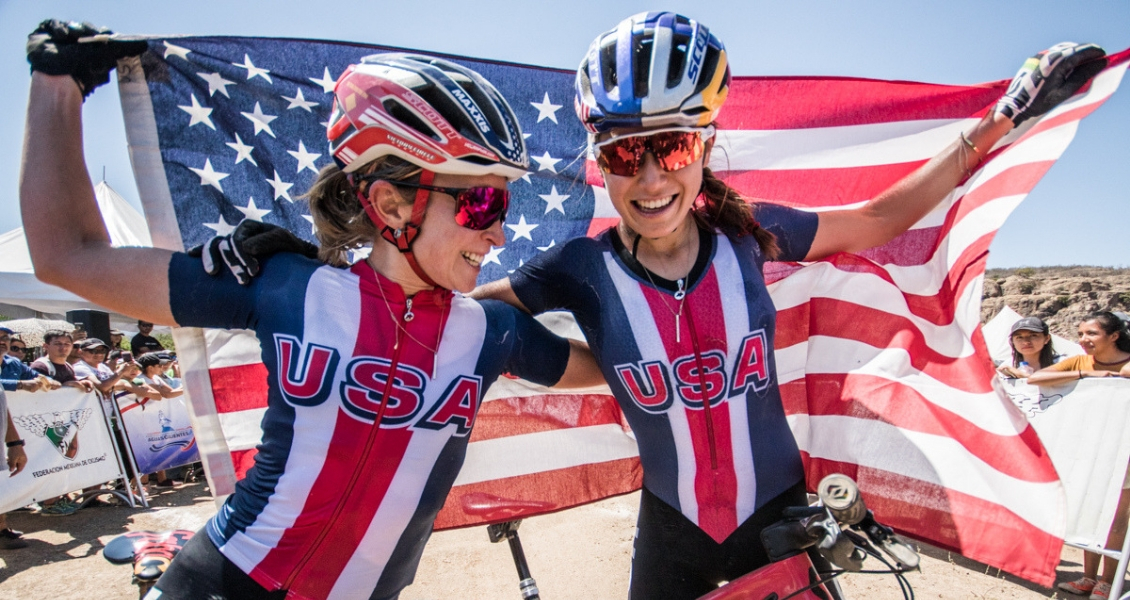 Other Top Performances for American Riders domestically and in Europe

The next day saw the Junior races where Riley Amos placed second, earning his second silver medal of the competition.

“Pan-Ams was such an eye opening experience into the impact mountain biking has on people all over the World,” said Amos about his first Pan-American Championship, “The venue and fans here were something special you won’t find anywhere else in the world.

Saturday was a full day of racing in the U23 and Elite categories starting with the U23 Women’s race where Haley Batten won gold followed by the U23 Men’s race where World Championship Silver Medalist, Christopher Blevins also took home the gold medal.

“Becoming the U23 Pan-American Champion is really special,” said Batten, “There were a lot of elements that needed to go right for a win like this and when all the pieces fall into place for a smooth race, it’s an incredible feeling. The support from USA Cycling has made it all possible and watching our team perform so well is amazing to be a part of.”

In the Elite Women’s race, World Champion Kate Courtney (San Francisco, Calif.; Scott-SRAM) pulled away during the second lap of five and never looked back, earning the Gold Medal in her first Elite Pan American Championships with teammate Erin Huck coming in second.

“I had an incredible experience at my first Elite Pan-American Championships,” said Courtney, “The crowds in Mexico were unbelievable and the challenging, technical course kept the racing exciting. For me, being able to go 1-2 with Erin Huck and have such a strong showing for the U.S. was a very special feeling.”

The female finishes as well as the silver medal in the team relay at Pan-Ams gained Team USA valuable UCI Points towards the moving them into the second position for Nations Rankings, which will help secure spots for the 2020 Olympic Games in Tokyo (the top two nations are given three start spots, nations three through seven are given two start spots, and the rest have one).

"For me, being able to go 1-2 with Erin Huck and have such a strong showing for the U.S. was a very special feeling.” -Kate Courtney, 2019 Pan-American Champion

Back in the states as well as Europe, other Americans had top performances over the weekend.

In the second event of the ProGRT, the NW Cup in Port Angeles, Wash.,

USA Cycling National Team Member and Individual Pursuit World Record Holder Chloe Dygert-Owen proved she was back in top form after taking nearly a year off due to a concussion at the Joe Martin Stage Race in Fayettville, Ark., racing with her trade team Sho-Air Twenty20 and winning stages 1 and 4 as well as the overall GC.

National Team Member, Brandon McNulty earned his first pro victory in Europe with trade team Rally-UHC Pro Cycling by soloing to a win in Stage 3 of the Giro di Sicilia to take a 59 second GC lead. During the final stage he finished fourth 14 seconds behind the stage winner keeping the overall GC and becoming the first American GC winner in the race’s 24-year history.

Megan Jastrab and the USA Cycling Junior Women Development Squad also made waves for a third weekend in a row. They continued their dominance on the European stage over the weekend by entering a small men’s kermesse in Belgium during their off-weekend in the middle of their spring Nation’s Cup campaign where they are currently ranked as the top nation. Jastrab placed third in a field of 82 men.