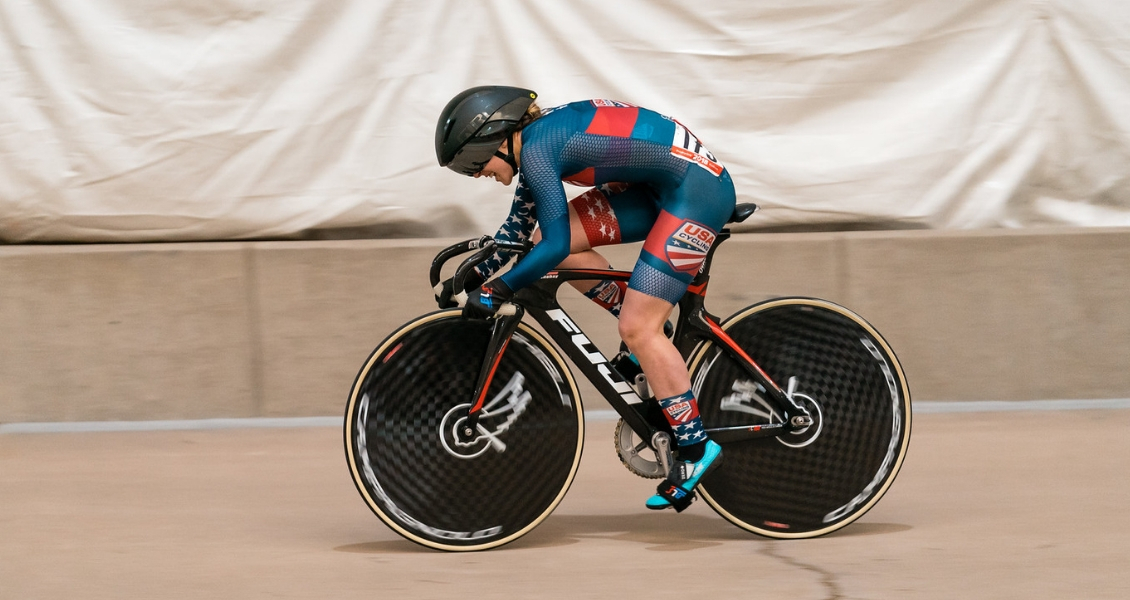 Over the weekend, four new junior national records were set in the flying 200m TT at the second round of the Junior National Track Cup (JNTC) took place in Colorado Springs, Colo. at the Olympic Training Center Velodrome.

Junior riders and four members of the USA Cycling Olympic Development (ODP) program, Ethan Swaidner* (Colorado Springs, Colo.), Jean-Luc Contant-Gatitello* (Coconut Creek, Fla.), Kaia Schmid (Marblehead, Mass.)  Kayla Hankins* (Scottsdale, Ariz.) and Sophia Shuhay* (New Tripoli, Penn.) not only broke National Records but also beat the required time standards to make the long team for UCI Junior World Championships. Swaidner was the first to go, and immediately set the standard with a new male 15-16 record in a time of 10.490, taking over 0.15 seconds off the previous record which had stood for over 15 years. Contant-Galitello followed and broke the male 17-18 record set just last year by his ODP team mate Evan Boone, with a time of 10.271.

Hankins went first for the females, again besting the previous W17-18 record held by Missy Thompson, one that had stood for more than 20 years.  She set the standard at 11.310, taking over a second off her previous competition personal record, this record was then broken again in the very next heat by her fellow ODP athlete, Shuhay, who beat it by a fraction of a second to claim the record with 11.304. Schmid followed suite of the other sprinters, breaking the 15-16 record with a time of 11.807.

"The second round of the JNTC was one of the main target events for the ODP Sprint group athletes for the 2019 season.

The aim was to use this event as a practice taper and as a chance to qualify for the Junior Worlds long team by beating the required time standards in the flying 200m TT.

The athletes certainly rose to the occasion, all four riders broke their respective National Records and bested the Worlds time standards. The riders completed the weekend by winning all the sprint events at this second round of the JNTC.

I'm very proud of these young athletes and how hard they have been working to make such big improvements in just the first 5 months of the Olympic Development Program being in place and look forward to their continued development and progression.”

“The second stop of the USA Cycling TDRS was a success.  For ODP athletes it was great to have the opportunity to train at altitude for the week preceding the race then to apply their newly acquired/honed skills at a national-caliber event.  Additionally, I enjoyed meeting and observing some of the talent that’s out there that has previously existed under the national radar. The TDRS serves as an important step in the development of track athletes in this country as it provides a series of opportunities for young athletes to practice their craft while building up for the national championships in July as well as creating an opportunity for the USA Cycling coaching staff to identify talent from all across the country. “

Designed as a compliment to the Olympic Development Program (ODP), the Track Development Race Series (TDRS) brings top junior national level racing to tracks across the nation providing both high level competition and chances for ODP program identification throughout the year. Series points are awarded at all JNTC races and Junior Track Nationals to crown the best male and female riders in both sprint and endurance categories. Series winners are granted invitations to the fall ODP selection camp each year.

* indicates athlete is a member of the Olympic Development Program

Garrison, Simmons and Sheffield swept the stage one podium, nabbing the yellow jersey and holding it through the second stage, along with the green points jersey. Garrison dropped down to second place after the third stage but with Lamperti and Sheffield sitting in the top ten overall heading into Monday’s final, decisive stage. Simmons and Sheffield, after doing the bulk of the work for the team went on the attack along with Nolan Jenkins and Luke Lamperti. The finale had mixed luck with Lamperti forced back to the peloton after an untimely flat tire, but Simmons was able to attack again and won the final stage. Sheffield moved into 4th - an excellent showing for a young man who just turned 17.

“The team rode together and all worked hard for each other during the very tactical race,” said Billy Innes, Junior Program Manager for USA Cycling, “The plan sometimes works out and sometimes not, but all the athletes learned valuable lessons in teamwork and how to fight during a finale. We have good momentum heading into our next race block.”