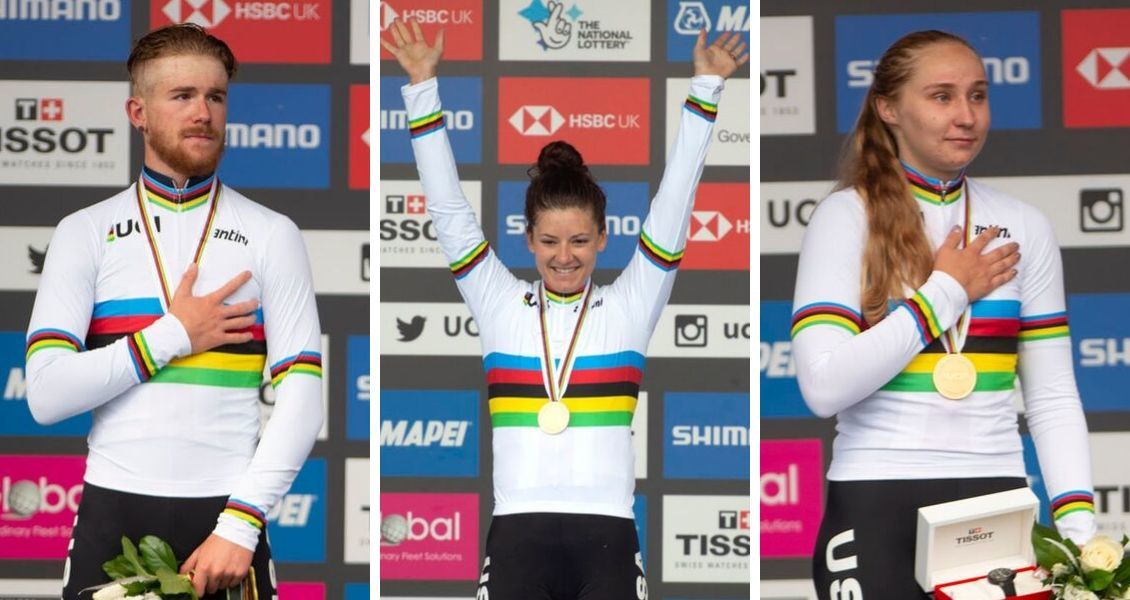 The U.S. National Team placed second to The Netherlands in the total count, bringing home six medals to the Dutch total of eight. Italy had the third-most medals with five.

“In all, this week has been extremely successful for us,” said Jeff Pierce, USA Cycling's Director of Elite Athletics, Road and Track. “We are starting to build off the foundation we've spent the past several years laying, and I anticipate that we will continue to see it pay off in big ways.”

"I really prepared well for this race, and I spent the past week with three-time Olympic gold medalist Kristin Armstrong," said Dygert, who currently lives in Port Orchard, Washington. "I was really well prepared. We focused on this race this year. I was coming back from injury, my concussion last year, and this is what we've prepared for, and now we're looking forward to Tokyo (Olympics in 2020)."

Durango’s Simmons, who finished fourth in the junior men's time trial, claimed the next gold medal for USA Cycling during the junior men’s road race, capitalizing on strong teamwork from Team USA, which also saw Magnus Sheffield (Pittford, N.Y.; HotTubes Cycling) finish on the podium in third. Simmons, who has already signed a World Tour contract for next season with Trek-Segafredo, soloed away from the field with 33km remaining.

"I still don't really believe it, but I had my eyes set on this since November of last year, so it felt really good to make it happen," Simmons said after the finish. "I wouldn't say I knew (that I'd become world champion), but I had a good feeling about this course and I had a really strong team. First of all, I want to say a big thanks to all the guys. They were on the front basically from kilometer zero, Magnus set it up perfectly, and I just found out that he sprinted for third, so it's a perfect day for America."

"I can't believe it. I'm just smiling ear to ear right now, and I'm just so grateful for my teammates today," Jastrab said at the finish. "It wouldn't have been possible without them. They were there from beginning to end. I know a couple of them got caught behind a crash, and they came back stronger than ever. I'm so grateful for them."

The penultimate day of racing in Yorkshire held the elite women's road race, where Dygert finished just outside the medals in the women's race after a daring ride to try and catch solo winner Annemiek van Vleuten of the Netherlands. Dygert’s solo effort fell short, and she finished just off the podium in fourth behind Van Vleuten, Van der Breggen and Amanda Spratt of Australia. Rivera was active in the final sprint of the peloton, placing fifth in the field sprint, and tenth overall.

Howes joined 10 other riders who slipped away in the rain-soaked conditions just 25km into the 260km day. The group built a lead of more than four minutes but the peloton brought them back on the closing circuits in Harrogate. USA's Lawson Craddock went on the attack with five laps of the circuits to go. Switzerland's Stefan Küng joined him, and the pair set off in search of glory.

When eventual winner Mads Pedersen (Denmark) bridged to the group of Craddock and Küng and added fresh legs to the leaders. Craddock was unable to hold the pace, he was dropped and eventually abandoned. The top finishers for the Team USA were Chad Haga (McKinney, Texas; Team Sunweb) and Neilson Powless (Roseville, Calif.; Team Jumbo-Visma) at 40th and 41st, respectively.

“It was a hard-fought race in brutal conditions today,” Pierce said. “Our riders took advantage of opportunities when they could and worked cohesively as a team.”