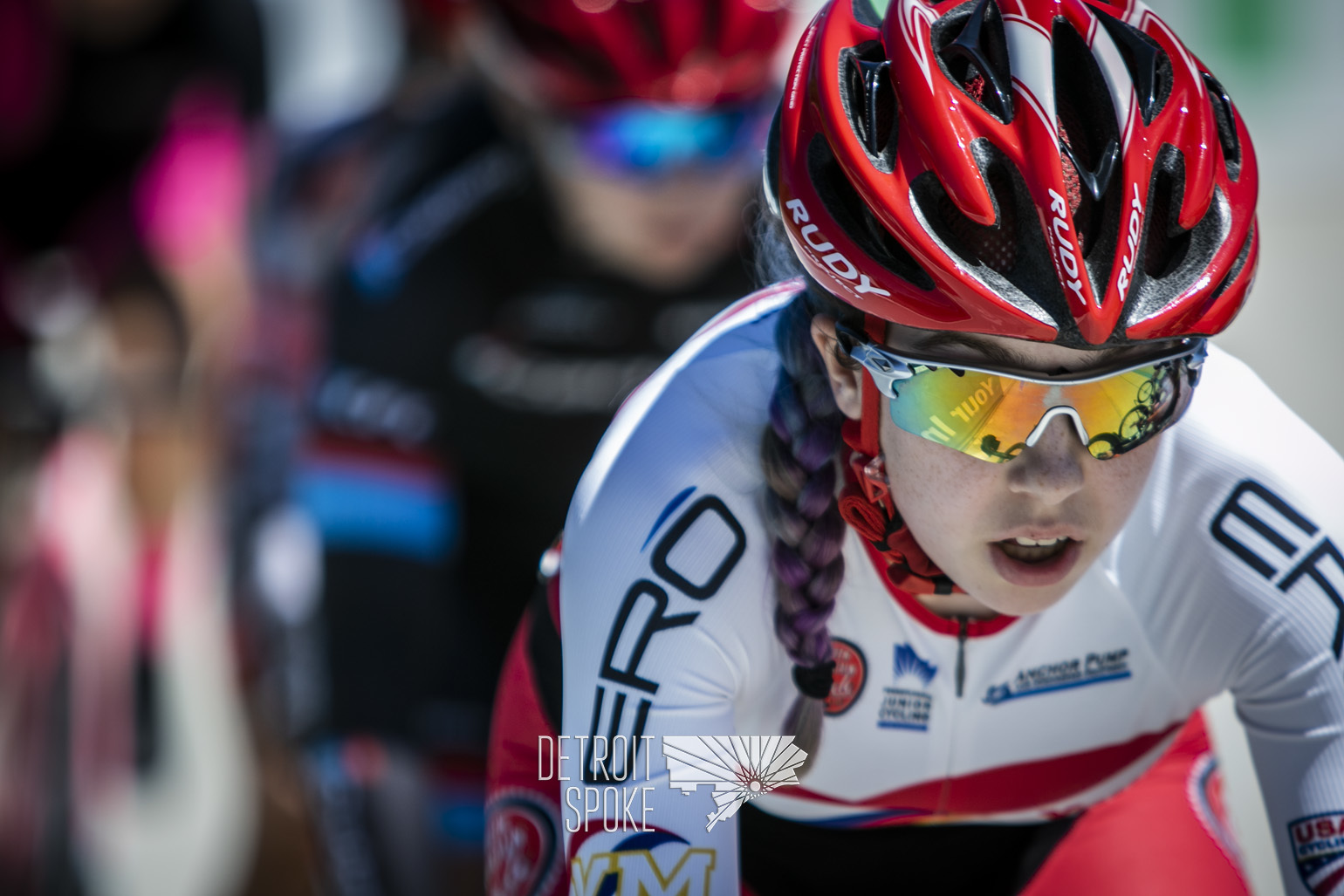 TREXLERTOWN, PENN. JULY 8, 2018 — The day was unprecedentedly calm for Pennsylvania summers on the second day of the 2018 USA Cycling Junior Track National Championships. The day saw ten national championship titles awarded to riders from all over the country.

The morning session saw 2 national titles awarded, along with further competition in the men’s & women’s 15-16 omnium, and a non-championship 500m time trial. In the women’s 15-18 points race, Megan Jastrab (Apple Valley, Calif./iCademy) took the title with a point total of 37. Said Jastrab, “It was fun, I was a little worried because I’ve been sick a lot this year, so I was worried coming into this [championship], so I was worried coming in. But I felt like I was really well rested and ready to tackle it.” Zoe Ta-Perez (Orange, Calif./Sho-Air TWENTY20 Development) took home silver with 18 points. In third was Bridget Tooley (Frisco, Texas/Latini’s Bicycle Repair) with 15 points.

The evening session finished out the last of our omnium events for the riders who are 16 or younger, as well as holding the keirin championship and the 17-18 scratch race championships.

Koester doubled on her hardware tonight as well, winner the women’s 15-18 keirin championships, all while having a broken collar bone. “Two weeks ago, I crashed in the UCI keirin and broke my collar bone straight in half. Going into today I was so scared, I didn’t know what I was able to do. I went into scratch race and raced my butt off. And I went into the keirin and was thought ‘It’s just another race, just race this one hard too.” Second place in the keirin went to Kaia Schmid (Marblehead, Mass./New England Devo. p/b Cadence) and bronze went to Stephanie Lawrence (Colorado Springs, Colo./Front Rangers Junior Cycling).

The evening closed down with the awarding of the national championship omniums for the 11-12, 13-14, and 15-16 age groups. In the women’s 11-12, Katie Smock (Indianapolis, Ind./Midwest Devo) pulled out the gold with her wins in the 2 km and the 500 m scratch races. Natalie Wang (San Diego/SDBC/EMERALD TEXTILES p/b UC Cyclery) and Alexis Jaramillo (Colorado Springs, Colo./Front Rangers Junior Cycling) received silver and bronze respectively.

Going for the repeat, Chloe Patrick (Carson, Calif./Team Velosport Junior & U23 Development - Rock n Road Cyclery) captured the win in the women’s 13-14 omnium for a second year. The next step of the podium was taken by Homare Yamashita (Breinigsville, Penn./BIG Picture Cycling) and Marissa Carter (Saint Charles, Mo./Team Mack Racing) rounded out the top 3.

Grant Carter (Macungie, Penn./T Town Elite) won the men’s 13-14 omnium. “It feels amazing because I have all my friends around me. They’re all hyping me up and stuff. I’m glad to have my family here”, said Carter about winning his first national championship at his home track. Beckett Tooley (Frisco, Texas/Latini’s Bicycle Repair) took home silver, and Zac Olszewski (Macungie, Penn./Gotham Cyclists) came in third.

Megan Jastrab, captured her second title of the event with a dominant performance in the women’s 15-16 omnium. She adds this to her points race title from earlier today. Zoe Ta-Perez also collects more hardware, taking the second step in the omnium. Kayla Hankins (Scottsdale, Ariz./Velo Track Cycling) captured bronze with her win in the 4-km scratch race in the evening session.