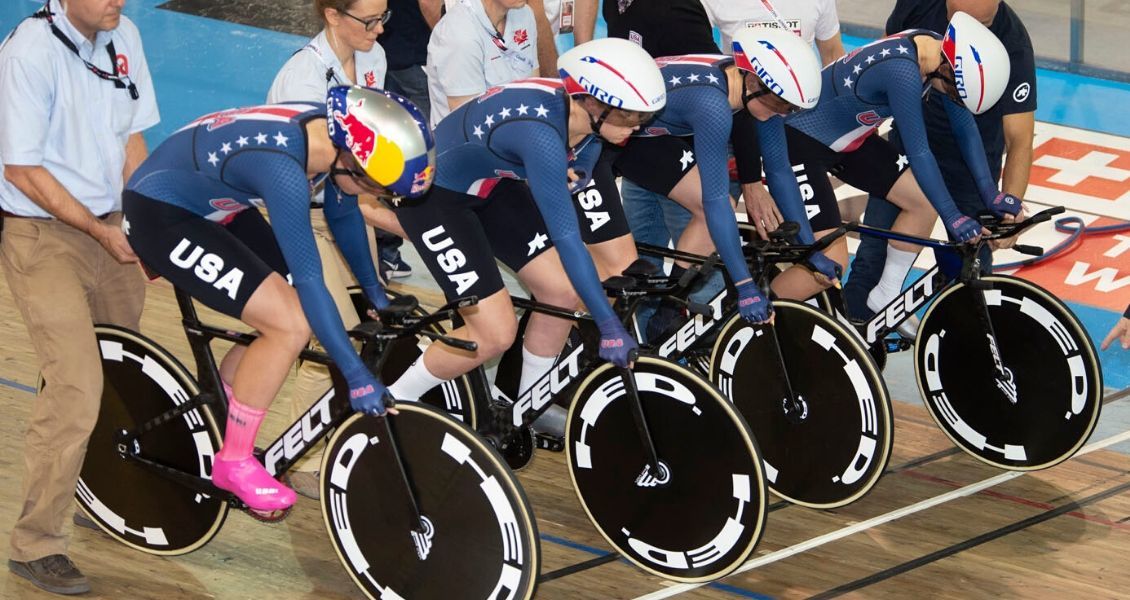 Twelve athletes will compete for the rainbow jersey in Germany

COLORADO SPRINGS, Colo. – USA Cycling announced today the roster for the 2020 UCI Track Cycling World Championships presented by Tissot. Eight women and four men will travel to Berlin, Germany to contend for medals, including the three-time UCI World Champion women’s Team Pursuit squad which will be looking to earn another rainbow jersey. Racing begins on February 26 and runs through March 1, 2020 at the Velodrom Berlin.

“Our team has been working incredibly hard this year and our momentum is building,” said Gary Sutton, USA Cycling’s Program Director of Track. “We’re excited to see what else we can accomplish before Tokyo and identify any areas we can improve before then.

Jennifer Valente (San Diego; TWENTY20 Pro Cycling p/b Sho-Air) will be in the spotlight in Berlin, taking on five events, most notably the Omnium. After her win at the final World Cup in Milton, Valente claimed the overall Omnium World Cup title. She will also take on the Points Race, Scratch Race, and the Madison with current Junior World Champion Megan Jastrab (Apple Valley, Calif.; Rally Cycling). For the team pursuit, Valente and Emma White (Duanesburg, N.Y.; Rally Cycling) will both be returning to squad in 2020, but with the added power of reigning Women’s Time Trial World Champion Chloe Dygert (Brownsburg, Ind.; TWENTY20 Pro Cycling p/b Sho-Air), Lily Williams (Asheville, N.C.; Rally Cycling), and Kendall Ryan (Ventura, Calif.; Team TIBCO) as the alternate. This stacked team pursuit squad will be vying to get the gold. Valente and Dygert were members of the winning 2018 Team Pursuit lineup that captured a third consecutive title in the event. This year’s lineup saw great success throughout the 2019-2020 season, with their most recent win in Milton, Canada at the UCI Track Cycling World Cup.

“The win in Canada was a great confidence boost, but we know the competition will be strong in Berlin, so we can’t let our guard down,” said Valente, USA Cycling National Team member, three-time World Champion and 2016 Olympic Silver medalist. “Our team is excited to represent the USA and this event will be our final chance to make a statement with Tokyo fast-approaching.”

Our sprinters have also had a great season so far. Madalyn Godby (Colorado Springs, Colo.) scored two bronze medals at the last World Cup of the season in the Keirin and Match Sprint. Mandy Marquardt (Allentown, PA; Team Novo Nordisk) will be racing the Match Sprint with her best finish this year being fourth at the Minsk World Cup. Both Godby and Marquardt are looking to secure their spots in the Olympic Games with the World Championships being their final chance.

This year, the U.S. men are looking to clean up across the Madison, Omnium, and Individual Pursuit races with Adrian Hegyvary (Asheville, N.C.; Texas Roadhouse Cycling), Daniel Holloway (Boulder, Colo.; Texas Roadhouse Cycling), Gavin Hoover (Manhattan Beach, Calif.; Elevate-KHS Pro Cycling), and Ashton Lambie (Lincoln, Neb.; HUUB Wattbike Test Team) on the roster. The men’s team have all had many standout performances during the 2019-2020 Track season. In September, Lambie broke the Individual Pursuit World Record for the third time, and all four men medaled at the Pan American Games.

"The guys have put in a lot of hard work this season and Berlin is going to be a great opportunity to see where we’re at as we hone in on the Olympics," said Clay Worthington, USA Cycling Men’s Track Endurance Coach.

The Team USA roster is as follows: