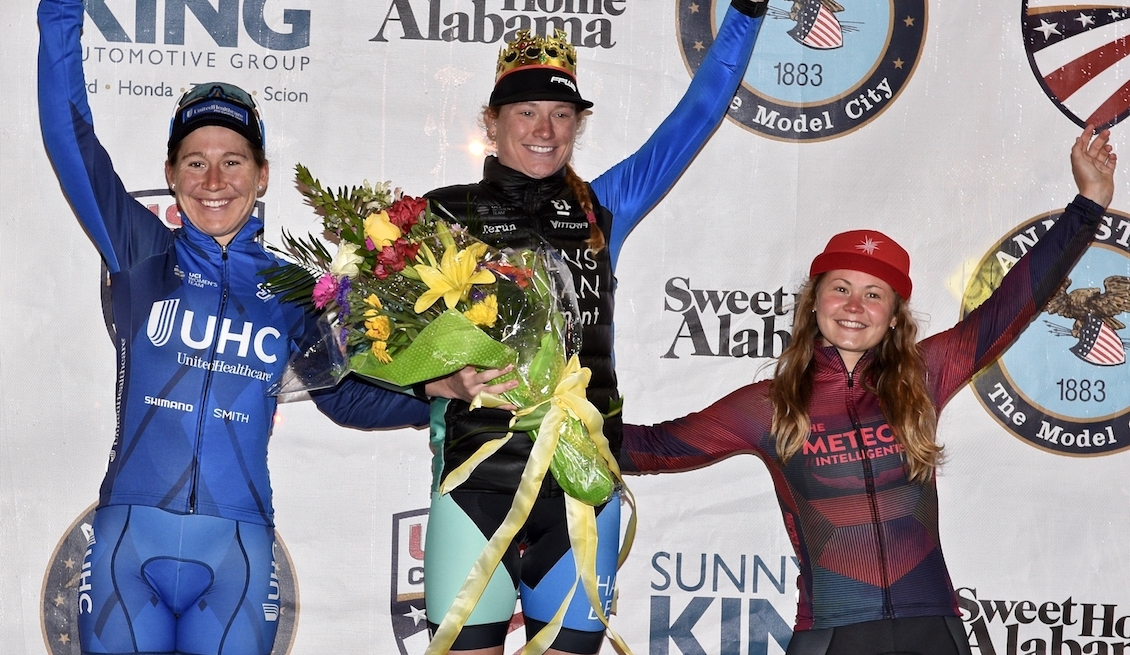 Anniston, Ala. (April 9, 2018) - - Rain, wind and freezing temperatures are not the typical southern-style charm that rolls out each spring for the Sunny King Criterium in Alabama. Strong fields for the men and women turned out no matter what the weather for the 16th edition of the “king of all crits,” and the first of 20 events for the Pro Road Tour.

With the criterium titles, Williams and Gomez take the early individual points lead in the PRT standings. In the team standings for women, Hagens Berman-Supermint has the edge over UnitedHealthcare Pro Cycling. The men’s team standings are led by Holowesko-Citadel p/b Arapahoe Resources, with Cyclus Sports Starlight Factory Team in second place.

The well-established Sunny King Criterium is part of a full weekend of events known as the Alabama Cycling Classic. Saturday’s criterium offered 21 categorized races for a variety of age groups and skill levels, capped under the lights with the signature PRT races for Cat 1/2 Pro Women and Cat 1 Pro Men.

The Pro Women’s criterium featured 54 riders all bunched together for the first 28 minutes on the four-turn, one-kilometer course. Halfway through the 60-minute contest Hanson was the first rider to create separation. Williams made a move to grab her wheel, followed by Harriet Owen (Oxfordshire, England/The Meteor//Intelligentsia). The three riders worked together to the final uphill sprint. Williams would win by half a wheel over Hanson, and Owen would finish two seconds back for third. Following over a minute back for fourth in the field sprint was Samantha Schneider (West Aliss, Wisc./ISCorp Pro Cycling), a winner of the 2016 Sunny King Criterium.

“I’m really excited. It’s only my second PRT victory,” said Williams, a new edition to the Hagens Berman-Spearmint women’s UCI professional team, on her winning her first attempt in the Sunny King Criterium. “I started racing last spring, so it definitely affirms that I belong here. I’m really pleased how it went tonight. I definitely did not expect to win.”

This time last year Williams was on a small team and won a road race at the Joe Martin Stage Race. She recently earned a graduate degree from Northwestern University, a school she represented with a fourth place finish in the 2017 U.S. Collegiate Criterium national championships.

The men’s 60-lap criterium took 1 hour, 34 minutes and 33 seconds to complete, with three Holowesko-Citadel teammates taking all top podium spots. It was Gomez who attached the 65-rider field after the first 10 laps.

“I think the wet road made it easier to be in the breakaway. It was pretty cold. The weather made it hard,” said Gomez, a 23-year-old Colombian, who finished sixth in the Sunny King Criterium last year on a smaller team. “I’m pretty happy with how my team worked today. We came with a plan of winning the race. I just went, you know, I didn’t know I was going to make it to the end, but sometimes you find your legs. Here in the States, this is actually one of my first big wins. I’m looking forward to getting more.”

It is a fourth consecutive year that a Hincapie Racing team has captured the top spot in the men’s race in Anniston. Third place was taken in the field sprint by Gomez’s teammate, Ruben Campanioni, a Cuban cyclist who lives in Miami, Fla. Fourth was secured by Daniel Holloway (Boulder, Colo./Texas Roadhouse Cycling Team), the reigning U.S. Amateur Road Race champion for Category 1 men.

“This is a team that we are taking to Joe Martin Stage Race next week, so expect to see us do the same thing there,” added second-place finisher Rhim. “This is a great start to the PRT. Hopefully we’ll just get more success.”

The PRT will include a mix of quality criteriums, omniums, road races, stage races and one individual time trial across 16 states, with 20 events taking place from April to September. The PRT features the nation's top road race events and is open to both professional and amateur cyclists. Individual and team champions are crowned at the conclusion of the calendar.