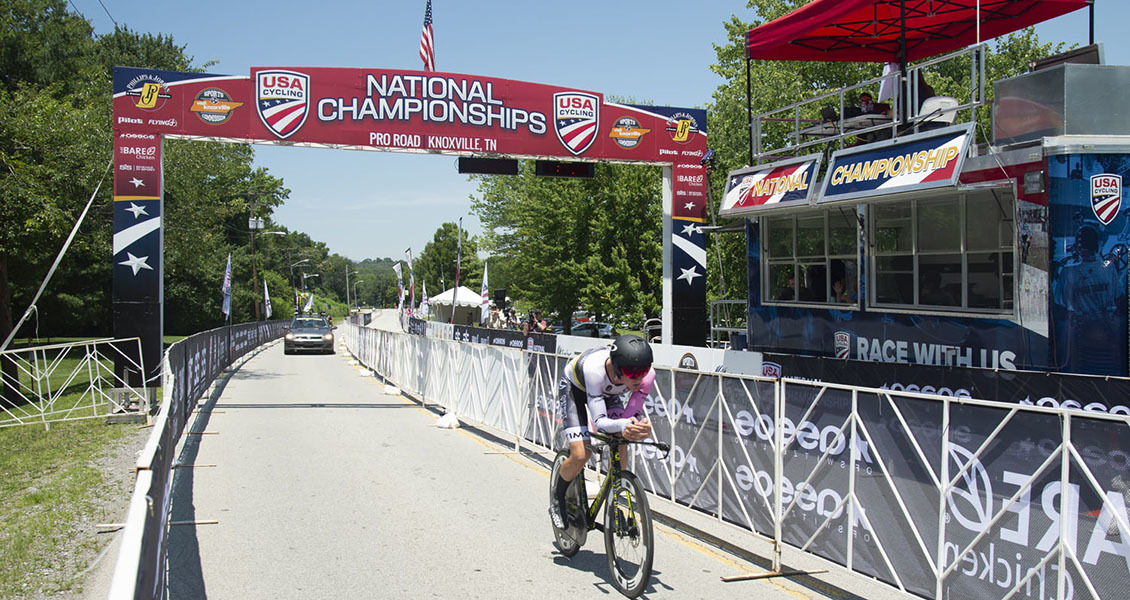 Ian Garrison (Decatur, Ga.; Hagens Berman Axeon) added his second ITT national title in seven days by taking the Stars-and-Stripes jersey for Elite Men. Last week in Hagerstown, Maryland, he won the Men’s U23 ITT Championship. He becomes the first male athlete to capture U23 and Elite national titles in the same year.

All athletes battled the heat and humidity on the 7.12-mile (11.5-kilometer) time trial course. Under brilliant blue skies, the temperatures climbed to 90 degrees and the heat index reached 100 by midday. Among the field of 23 elite women, Neben blasted across the two laps to secure her third consecutive ITT title in as many years. She captured a third gold medal in a time of 30 minutes, 19 seconds.

“The first year (in Knoxville), we raced in downtown Knoxville, a very, very different

course. The demands of the course were very different,” the 44-year-old Neben said. “That was actually the first win (here). It was my second (career) TT win, but it had been the first one in a long time so it was pretty special. The second one was at this beautiful area (Oak Ridge). The roads are just smooth and flowy. I think today I was the most nervous of all of them.”

Defending champion Neben exhibited her dominance by leading her nearest competitors by 23 seconds after the first split. Only half a second separated the riders fighting Neben for medals midway through the race, and it would be Dygert-Owen taking a six-second advantage over Leah Thomas (Boulder Creek, Calif.; Bigla Pro Cycling), the current Pan American Elite Women’s Time Trial Champion, for second-place. Thomas improved from her fourth-place finish last year.

“Going into that first lap, I really tried to get into my rhythm,” said the 22-year-old Dygert-Owen about her U23 title on Thursday. “I really tried to stay as steady as I could. I just went as hard as I could on that second lap. A little disappointed today, but I gave it one hundred percent, really all I had.”

The Men’s Elite event featured 38 riders, covering three laps for a total of 21.3 miles (34.2 kilometers). With defending National Champion Joey Rosskopf (Decatur, Ga.;Team CCC) foregoing his entry, the title was up for grabs. Oak Ridge was the site of a quiet research and development effort, the Manhattan Project, that ended World War II, there were no secrets on Thursday about the fastest men on bicycles.

After the first two laps of the final wave of riders, Garrison trailed Neilson Powless (Roseville, Calif.; Team Jumbo-Visma) for the best time. On the third and final lap it was Garrison who turned on the afterburners, winning in 42 minutes, 58 seconds.

“I don’t think it’s set in yet, but it’s a great feeling no matter what,” said the Georgia

native about his second ITT national title in a week. “The preparation goes back a long ways, so even in the off season just thinking of working on my time trial and spending time on the time trial bike. And then in the past month, it’s just been dialing in the training, longer hours, thinking how this was going to be a long effort.”

Powless was one of the favorites to win the race, having earned double medals in the ITT championships in 2017, a silver in the U23 ITT and a bronze in the men’s elite ITT that year. He would not fade completely on the final lap, holding on second, 28 seconds behind Garrison.

“I was just too eager for it and I was too excited and it just got the better of me,” Powless said. “Yeah, it was still a decent result, I’m happy with the result. In my personal performance I know that I could have done better, so I just look to the future.”

The U.S. Pro Criterium Championship will take place Friday, June 28 under the lights in downtown Knoxville. The women will race for 70 minutes in downtown Knoxville beginning at 6 p.m. The men will race for 80 minutes beginning at 7:25 p.m. The 1.1-mile closed-loop circuit will roll along S. Gay Street and feature six turns, with one steep climb on Clinch Avenue. Sunday, June 30, brings the signature event of the championships, the U.S. Pro Road Race Championship, which will also be held in downtown Knoxville. All four races on Friday and Sunday will be live streamed this year on the USA Cycling Facebook Page and YouTube Channel.

For start lists and call ups for all events,click here.

The U.S. Para-cycling events began Thursday with 13 athletes defending their crowns and eight additional athletes earning time trial national champion titles. A full report can be found here. Competition continues Friday with the handcycle relay and concludes Saturday with the road race. Follow U.S. Paralympics Cycling on Facebook, Twitter and Instagram for updates throughout the event.