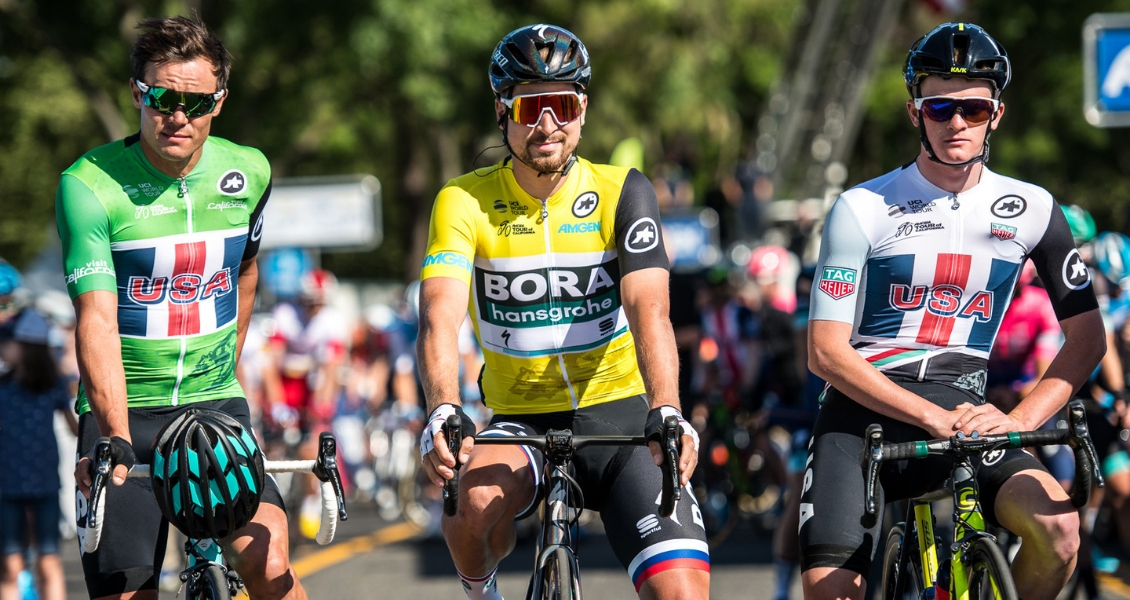 Hernandez spends day in the break and wins intermediate sprint

The 2019 Amgen Tour of California’s second stage on Monday was accompanied by altitude, warm weather and more than six hours of riding into the Eastern Sierra Nevada. As a result, the race had its second stage winner, second race leader and progressed as a tough, but strong day for the USA Cycling National Team.

a 50-second lead. Hernandez, normally a sprinter, was particularly strong. He took the first sprint of the day, 32 miles into the stage in Placerville. He was also was third in the first King of the Mountain, another 12.5 miles into the day and at or near the front until about 45 miles remained.

Travis McCabe (Prescott, Ariz.) began the stage four seconds behind former race leader Peter Sagan with his second in the opening sprint stage. The sprinter found himself in the chase group of the leaders going into the final miles of stage two, but his front tire flatted with about three miles left in stage 2. McCabe received a new bike and finished 31st, 1:05 behind Asgreen.

McCabe is now 29th in the general classification, 1:01 behind Van Garderen, and is highest placed among the seven-rider National Team.

"There will be tougher days, but this is the biggest day we are going to do all week," said McCabe, competing in his Tour of California. "Everyone's legs were fresh and everyone came out to race. The racing started with about 100K to go. I was trying."

McCabe's status entering the stage was likely going to be precarious, and that's the way it evolved. McCabe, age 30, is the team's veteran rider. The rest of the squad's riders are all age 24 and younger. Several teammates said it was longest day of racing of their young careers.

Mike Sayers, the National Team's manager, was still racing in 2008 when Stage 4 of Tour of California advanced more than 140 miles from Seaside to San Luis Obispo. It took nearly seven hours in a cold, severe rainstorm for winner Dominique Rollin of Canada to finish. Some riders pedaled for nearly eight hours.

Sayers said Stage 2 was likely the second most difficult stage in the race's 14-year history.

"It was unreal; it was super hard," Sayers said. "The first 130K was really grinding and then it started to go fast. There's a definite separation between guys who are used to doing that and guys who are not. You can't expect guys who don't do that on a regular basis to do that with the guys who do."

"I was a little tired, but it wasn't too bad today," said Stites. "I was able to hang on until one of the last climbs. It was kind of like a

slow burn. It just crept up on you and then you realized you'd been riding for six hours."

With McCabe in second in GC at the start of the day, his young teammates worked as they could protect their team leader and they provided water bottles from the team cars. McCabe eventually had to forge ahead alone.

"I did everything I could," said McCabe. "We thought maybe I could make it over the climbs, which I did. If it ended in a group sprint maybe I could have a shot at it. But it doesn't play out that way sometimes. You have to play your cards and I've learned you can't force races, especially these.

"You have to decide how you want to race. Our tactic was to go with a group sprint approach," McCabe said. "But eight guys got up the road and it wasn't up to to chase. It (the break) didn't come back."

While unfortunate, McCabe's flat provide an example of one cycling's curses. There's no good time for a flat, just some flats more ill-timed.

"The team did its job all day," said Sayers. "We got (Michael) Hernandez in the break. He wasn't the ideal guy for us, but he weathered the storm and he did what he had to do. Travis did a fantastic ride, but he had some really bad luck. There was a little bit of chaos in the caravan and I went by him. We got him a new bike. He didn't lose much time, but he had to use energy to get back to the group."

This year’s National Team presence at the Tour of California was made possible with the additional support of JustBARE Chicken and VolvoUSA.