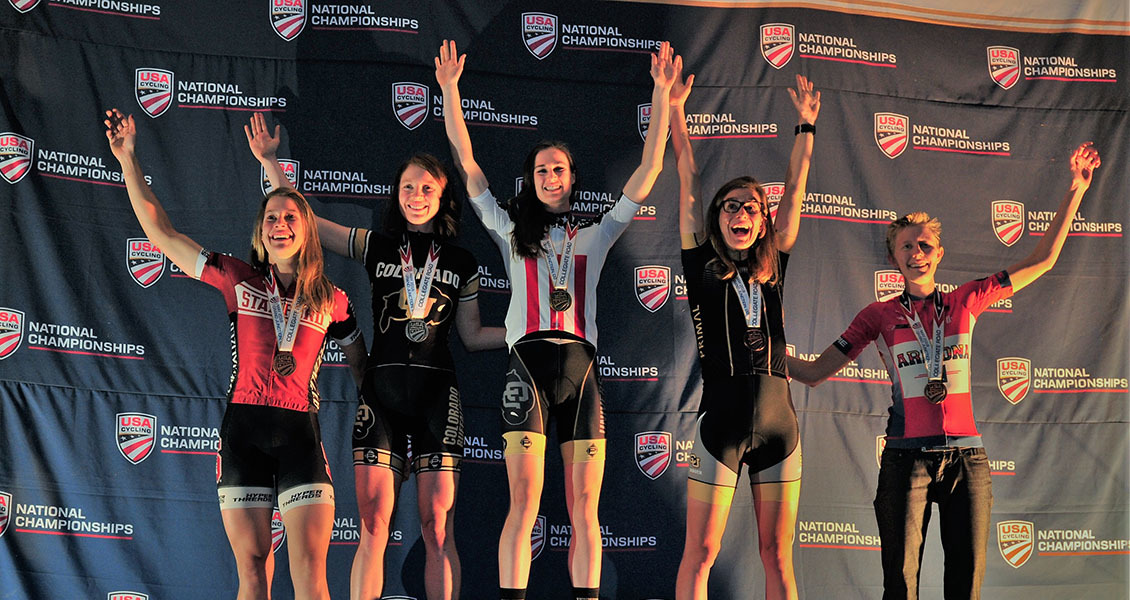 On April 2, 2018, Lauren De Crescenzo celebrated her two-year “crashiversary.” It was a big milestone for this year’s USA Cycling Collegiate Road National Championships road race bronze medalist. The date marked two years since one moment changed her life, and two years since doctors doubted if she would ever ride again, let alone stand on the podium.

She was nearing the end of the 56-mile, 8-circuit San Dimas Stage Race in Southern California on April 2, 2016, racing professionally for Visit Dallas DNA Pro Cycling. During the field sprint, with about 100 meters left, her race ended.

“I have no memory of any of it, but people have said I got my handlebars stuck in the fencing when I was leading out my teammate. Then I did a serious faceplant,” she described. “I’m completely in the dark about the entire crash, which I’m actually pretty happy about. If I would remember exactly what happened, I don’t know if I would be racing again.”

She sustained multiple injuries. Her teammate, Beth Ann Orton, a physician’s assistant, and EMTs were the first to treat her. Orton opened De Crescenzo’s airways while the ambulance was en route. She was quickly airlifted to the USC Medical Center where doctors put her in a medically induced coma to begin treatment.

CAT scans showed a little bleeding in her brain, but it was remaining stable. She also suffered a fracture of the occipital condyle, a spinous process fracture of the T1 vertebrae, broken bones in her hand, and facial trauma that required stitches. The collective impact of her injuries was not immediately known, yet doctors were optimistic.

Family, friends and teammates were with her during 10 days in the ICU and following days in the hospital in Los Angeles. They kept a blog to update others of her progress. De Crescenzo, however, doesn’t remember any of her time in California.

“For six days I was in a medically induced coma, and I have no memory of California,” she said. “I see pictures of myself just walking around the hospital in California – my face is blank and I have no memory or consciousness or awareness of that time. I just remember waking up at Craig Hospital three weeks after the crash on April 23 (because I’ll never forget the date), looking around the room, and wondering why my family and friends were in my hotel room in San Dimas. It was like that three-week period had never happened, even though I was awake and functioning, and walking around talking to people.”

After 16 days, De Crescenzo was transferred to Denver’s Craig Hospital, a premier rehabilitation center for people with traumatic brain injury (TBI), and closer to her hometown. The move brought her close to family and back to where she had been planning her future in bike racing.

De Crescenzo had learned to ride a bike while growing up in nearby Broomfield, Colo. It wasn’t until she was a student at Emory University in Atlanta that she began racing.

“In high school I started riding, but when I went to college in Atlanta was when I started doing group rides – the pizza ride, the airport ride. That’s when I decided to be a bike racer, because I wanted to win those group rides,” she shared. “I was the only student racing at Emory – I was the team. It was a club team that consisted of me and only me.

“Immediately after college, I got in my car and moved back to Boulder [Colo.]. I initially planned on going straight to grad school, but then thought, ‘I want to be a professional bike racer.’”

In 2011, while in college, De Crescenzo participated in the US Talent ID Camp at the Olympic Training Center. The next year, she won bronze in the road race at the 2012 USA Cycling Collegiate Road National Championships. After graduation, when she set her focus on reaching the next level in her racing, she headed to Europe to compete as part of the USA Cycling development team.

And, just a few months prior to the crash, De Crescenzo had joined the professional ranks.

“Before the crash, I thought my life was totally on track and I wanted to go to the Olympics, I wanted to be one of the best bike racers ever. That was my goal. Then, in one second, it went from that to wondering, ‘what now?’” she said.

Initially, doctors were not sure what recovery looked like for De Crescenzo.

“They were saying, ‘this could be it, this could be her, and we don’t really know what the brain will do,’” she heard from doctors. “Each person’s recovery is different.”

With each day, she was progressing. After she woke up at Craig Hospital, she started moving again, and moving a lot. She was anxious and didn’t want to be constrained to her hospital room, so she started walking. A nurse would join her as they roamed the hospital’s halls and walkways, trekking up to 15 miles a day.

Doctors, nurses and family quickly realized she was ready to leave. So, after five weeks at Craig Hospital, two total months of hospitalization, it was time for the next phase of recovery.

“I was really confused still when I left the hospital, and my memory was still horrible,” she said. “I was very, very sad coming out of the hospital. Going from being a pro athlete to hospital-ridden, it sucked.”

De Crescenzo didn’t know what came next. She could no longer live alone, she was struggling with balance, and her racing career had been abruptly cut short.

“The first month, I was in this mindset of, ‘I hate bicycles, and I will never get on a bike again.’ I just looked at a bike and thought, ‘That’s why I spent two months in a hospital.’ I didn’t like what it did to me,” she said. “Then, I started wanting to exercise.”

She wanted to do more than just walk, so she got on the trainer because doctors didn’t want her riding outside yet. Time on the trainer progressed to riding on rollers. Doctors and family were worried about her balance, so moving to the rollers was her way to prove to them she had enough balance.

The next step was to ride outside, and doctors had given the okay.

“All of my friends were pushing me to get back on a bike. They knew it made me happy, and I was really not happy,” De Crescenzo said. “It was amazing. I loved being back outside riding and the wind in my hair.”

Six weeks out of the hospital, still recovering from a TBI, she was on the roads of Colorado again. That first ride back was another big milestone, and it was with the perfect riding partner – Olympian and 2012 U.S. Pro Road Champion Timmy Duggan. In 2008 Duggan had also suffered a traumatic brain injury after a crash during the Tour of Georgia. He rebounded to win the U.S. title and make the Olympic team.

De Crescenzo may not have felt totally balanced back on her bike, but she was active again and doing what she loved. She was encouraged by Duggan and her friends, and she had company to keep her safe and motivated.

“It really, really helped my recovery. If not for cycling, I would probably still be extremely depressed,” she said. “It gave me a lot of mental clarity. Being outside was very therapeutic for me and my depression, just moving around, and hanging around with my friends. I love going on rides with my friends. That’s a huge reason I’ve been able to race again.”

Gradually, her riding became more frequent and her balance improved. She also reverted to her pre-racing path and enrolled in graduate school at the Colorado School of Public Health. She had started studying for the GRE while in the hospital, and in 2017 she began classes at the school’s University of Colorado – Denver campus.

De Crescenzo also began doing what she had known during her undergraduate days – going on group rides, this time with members of the CU club team. Her rides were getting longer and her fitness was improving.

In February 2018, she entered her first race since the crash – the Old Man Winter Bike Rally in Colorado. She won.

Friends quickly dubbed her the “Comeback Kid,” and she had found gravel as a comfortable way to ease back into racing.

“I was really hesitant toward getting back into road races and crits,” she said. “The first race I did back was a gravel race – I was riding a lot of gravel. Then my best friend, Heather Fisher, and I went on this ride to Fort Collins (Colo.) and back. It was a 120-mile ride and she told me how fit I was and said I should do Coll Nats. So, I said okay.”

Returning to the National Championships had not been on her radar. Two weeks prior, when she entered the Front Range Cycling Classic at the Air Force Academy and won the women’s criterium, she knew she was ready to make another run at the collegiate championships.

On May 4, at the 2018 USA Cycling Collegiate Road National Championships in Grand Junction, Colo., she “almost won the road race.”

“At 15K to go, I attacked and was solo for the next 14K. Then two girls passed me with 1K to go,” De Crescenzo. “It was huge. Someone said to me, ‘Lauren, two years ago you were at Craig Hospital, and now you just got third at Nationals. I think you’re going to be okay.’”

She was surrounded by friends, family, teammates, and students from many other schools – the cycling family that encompasses a big part of what she loves about racing. After not participating in a major race since the crash more than two years prior, she came away from Collegiate Road Nationals finishing third in the road race, fourth in the individual time trial and fifth in the Criterium as well as a second Collegiate Road Race bronze medal, captured four years after her first.

“It was a huge milestone. It kind of showed me that I’ve still got it. The TBI didn’t take away my ability to do what I love and be a bike racer,” she said.

Her dad was on the sidelines to cheer her on, just like he and the rest of her family has been throughout her recovery. And, De Crescenzo knows there’s still hesitation by her family every single day she goes on a bike ride. She says she tells people, “Did you expect anything else from me? Of course I’m going to do this again.”

Every rider has a story and we want to tell them! E-mail mystory@usacycling.org to submit your story or the story of a rider who has inspired you.