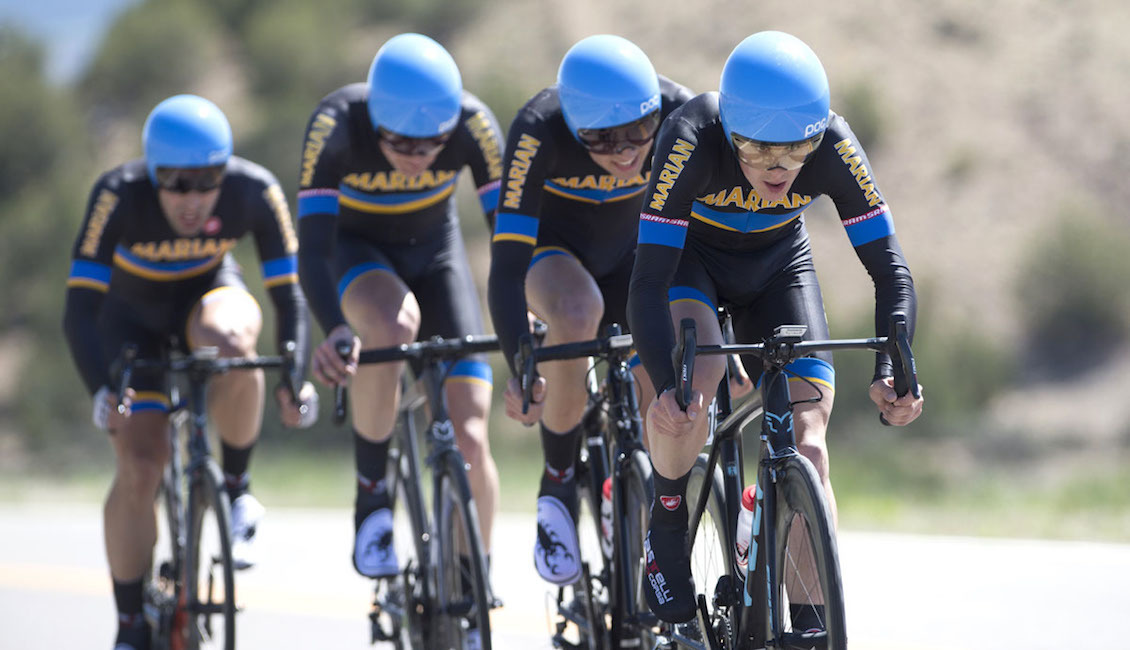 The club women kicked off the day. The team of Shelby Hoglund, Cara O’Neill, Kat Salthouse, and Chloe Welchfor the University of Arizona took the top step of the podium in a time of 48:12.95. Close on the heels of the University of Arizona was Stanford University’s Daniela Deschamps, Heidi Poppe, Hannah Thompson, and Sarah Tollmancoming in at a time of 48:15.32. Third place, in a time of 48:33.94, was Emma Edwards, Amy Ousterhout, Sarah Weiss, and Tori Wuthrichof the Massachusetts Institute of Technology.

Varsity women took to the course next. The Marian University women’s team of Alijah Beatty, Madison Kelly, Laurel Rathbun,and Emma Swartzcompleted the course in a blistering time of 45:27.25. This is the ninth consecutive team time trial title for the Marian University women’s program. Colorado Mesa University’s Natalia Franco, Luise Ollick, Emeile Persson, and DafneTheroux-Izquierdoduplicated the teams effort from last year, coming in second again in a time of 46:32.16. Lindenwood University rounded out the top 3 with a time of 47:38.36. The team consisted of Leigh Dukeman,Ellie Morgenthaler, Samantha Runnels, and Annika Teschke.

The Marian University men’s squad also continued their winning streak in the team time trial. This is the fourth year that the team has taken home the stars-and-stripes. The team consisting this year of Brice Brookshire, Zachary Carlson, Hugo Scala Jr., and Ben Schmuttecompleted the course in a time of 40:01.27. Brannan Fix, Caiden Plummer,Mauro Rato, and Torbjorn Roedof Colorado Mesa University snatched the silver with a time of 40:50.92. Savannah College of Art & Design – Atlanta took the third step of the podium with a time of 41:38.00. The team was made up of Willem Kaiser, Artur Sagat, Andrew Scarano, and Wilman Vargas.

Repeating yesterday’s 1-2 punch in the club women’s road race, University of Colorado – Boulder’s Margot Clyneand Kristina Vrouwenveldertook the top two steps of the podium, clocking a 36:35.50 and 38:35.13 respectively. Rounding out the top 3 was Danielle Morsheadof Brown University in a time of 38:49.74.

The varsity women saw Kennedy Adamsof Marian University take home the gold, winning the race in a time of 39:40.77. Second place was taken by Charlotta Zeilerof Savannah College of Art & Design – Savannah. Her time was 40:16.74, which just edged out Brevard College’s Janelle Cole’s time of 40:25.27, placing her in third.

The varsity men closed out the day with their individual time trial. Fausto Crapizof King University won his race with a time of 32:44.90. Belmont Abbey College rider’s Charles Danieland Jesse Kooistraplaced second and third with times of 34:01.92 and 34:11.37 respectively.

Racing concludes tomorrow with the criterium races in downtown Grand Junction. For live updates from Collegiate Road Nationals, follow #collnatsand @USACCollegiateon Twitter and Instagram. You can also see the links below for more information.