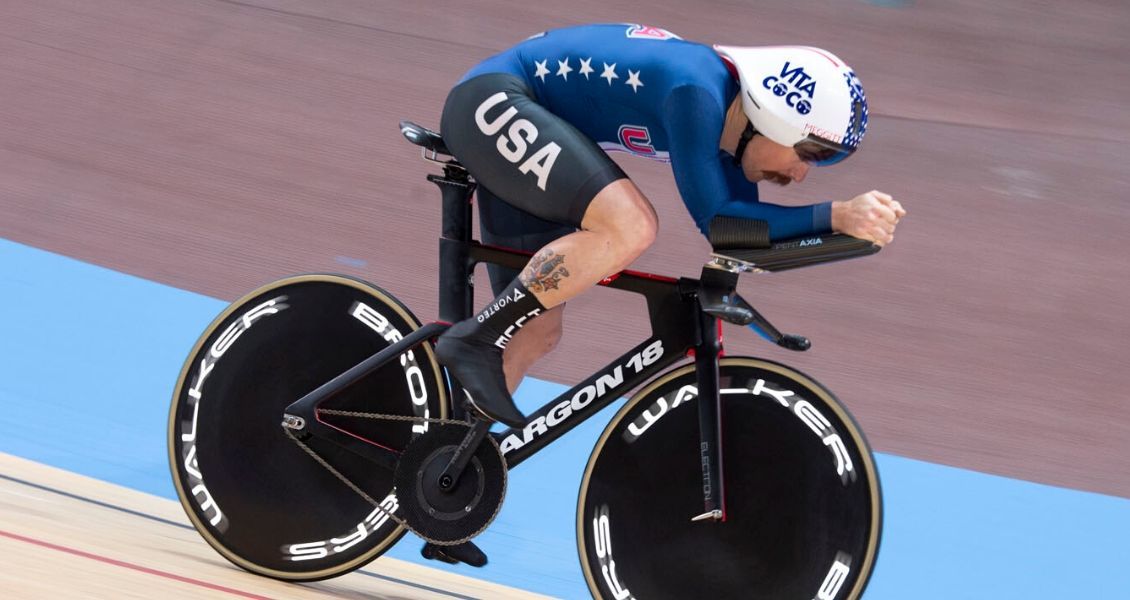 Lambie was seeded in heat nine of ten, as deference to his title as the Pan-American Champion, which he won in Cochabamba, BOL in September of 2019. When winning his title, he also set the world record at the time with a 4:06.407. Lambie would start his qualifying race strong, having the fastest time at 1,000-meters at the time. He would continue his pace and go on to be seeded first after his heat, guaranteeing him a place in the gold medal ride in the evening. His qualifying time was 4 minutes and 3.640 seconds. Fillippo Ganna of ITA, would set the fast time of the day, and a new world record of 4:01.934.

“I’m happy with this race. Going up against Ganna, who’s arguably one of the best pursuiters ever, was an honor. The fact that he broke his own record again in the first session is crazy.”, said Lambie about his gold medal ride. “My coach and I had a plan. We had a schedule until six laps to go, and then he’d show me where I was at in relation to him.”

Moving to the evening session, Lambie would go in a head-to-head ride against Ganna. In the first 2,000-meters, he would lead the Italian by a tight margin. But Ganna would steadily pull forward in the last half of the race.

The day started with Valente racing the first event in the Women’s Omnium, the Scratch Race, the event she received a silver medal in on Wednesday. With five laps to go in the event, Valente would come from the back of the field, and go straight to the front. She would sprint for the win against Dutch Kirsten Wild and Japanese rider Yumi Kajihara, with Karjihara taking the win. Valente would be awarded second after Wild was relegated. In the tempo race, she would lead through on several laps, and just barely miss taking a lap on the field, finishing in 4th.

The omnium would start in the evening with the elimination race. Valente would be shut out early, being unable to move out of the last position safely. She would come back in the points race, racing assertively, making ground back with each sprint. Valente would gain 11 points, taking maxium points in 2 sprints, and move from ninth to fifth.

Daniel Holloway (Boulder, Colo.; Texas Roadhouse Cycling Team) would compete in the Men’s Points Race. After gaining an early three points in the event, he would add action to the front of the field. With two laps to go, Holloway crashed unable to compete in the final sprint of the race.

On Saturday, Chloe Dygert (Brownsburg, Ind.; Sho-Air TWENTY20) and Emma White (Duanseburg, N.Y.; Rally UHC Pro Cycling) would take on the Women’s Individual Pursuit. Dygert is the current world recorder holder in this event, as well as the reigning road time trial world champion, so she should put on a show. At the same time tomorrow, Gavin Hoover (Manhattan Beach, Calif.; Elevate-KHS Pro Cycling) will take on the Men’s Omnium, in the hopes of bettering his fifth place finish from the UCI Track World Cup in Milton, ONT, CAN.

For more about the 2020 UCI Track World Championships, please visit the event website at https://www.trackcycling-berlin.com/. The event schedule can be found here. Start lists and live timing can be found here.

All evening sessions will be livestreamed on NBC Sports as part of the Gold Package. Below is an approximate schedule of times and events in the broadcasts.