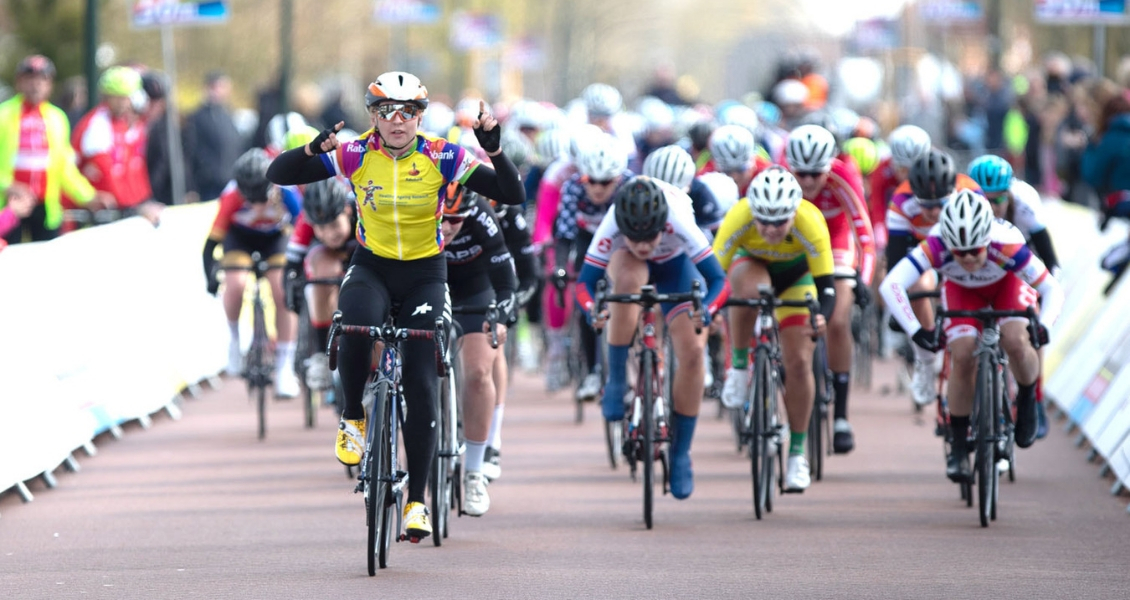 Coming off a stage win earlier that week at the Redlands Classic, Jastrab traveled to Italy to compete in the Trofeo Da Moreno where she won the field sprint with teammate Katie Clouse placing sixth. The following weekend, the team raced in Belgium at Gent-Wevelgem where Jastrab won the field sprint to take second with Clouse finishing fifth.

During their off-week, the team opted to do a small kermesse in Belgium where Jastrab and the USA Cycling Junior Women Development Squad also made waves for a third weekend in a row. Without the option of a women’s field they raced with the junior men where Jastrab placed third in a field of 82 men.

This past weekend was the Healthy Ageing Tour, a three-day stage race in the Netherlands. Jastrab won all but two jerseys, claiming the top step on the first and third stage as well as the overall GC. During the last stage, after having some mechanical difficulties she got a bike change in the last 7km, she then chased back to the peloton between the cars to catch the peloton at 1km at win the sprint.

“I am extremely happy with my performance and the team’s performance at Healthy Ageing Tour. After only 4 weeks of riding together, I can confidently say we rode as one.

Going into the final stage with the GC lead, we knew it was going to be a battle and everyone went all in to keep the GC. On the final stage with 5k to go I broke 7 spokes of my front wheel and had to have a bike change. It was a fast change and I got back in the group quickly. After that, I had to work my way through the peloton of a 100 girls. I took gaps where I saw them and was at the front again with around 3k to go. Going into the final straight away I was with Katie [Clouse] and then moved to top 5 with 1k to go and waited till around 200 to start sprinting.

It was an amazing feeling winning the stage and keeping the GC, BYR, and Points Jerseys after all the work the girls and I put in this weekend. I can't thank USA Cycling enough for providing me with this opportunity to race in Europe for the last 4 weeks. I learned a lot and had an amazing time.”

“This team really came together in this race when the pressure was on. They answered all of the attacks in a very aggressive race and delivered Megan to the final kilometers in perfect condition.  It was an impressive performance by everyone. Megan was simply unstoppable in the sprints.  The other countries are all very happy to see her get on the plane today back to the USA.”

With the U.S. ranked first in the Nation’s Cup standings, leading second ranked Great Britain by 17 points, they will be allocated the maximum amount of five slots for the junior women category at the 2019 World Championships this September in Yorkshire, U.K.