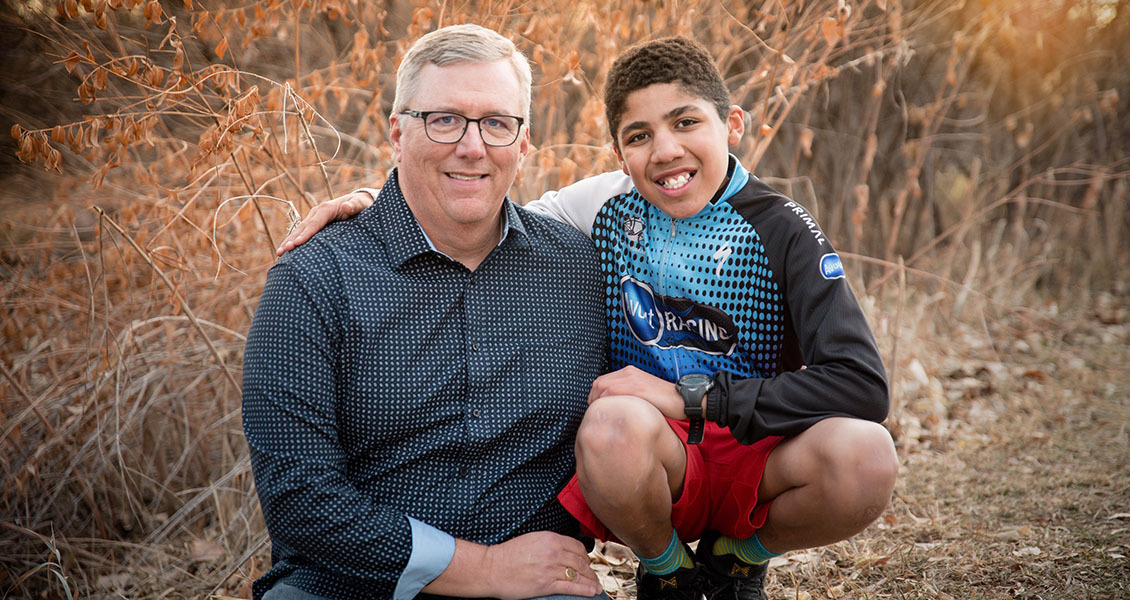 “Cycling is kind of our thing”

Robert Edwards grew up riding a bike, but now the bike offers a way for he and his son Ian to connect. Here he shares what the bike means for each of them and how it has brought them closer.

I grew up in a small town in South Georgia and there was not much to do as a kid, so you kind of had to look to your own devices. I started riding a bike and then I wanted a nicer bike because I couldn’t quite drive yet but I wanted to socialize with friends. A bunch of friends and I had bikes and we would ride around town and do things to earn extra money to go blow at the arcade because when I was a kid – in the early 80s – it was all about pinball and the big thing to do was to go hang out at the mall. So, my buddies and I would either go pick up cans or pick up pecans on the side of the road and take them to the processor and get cash for them – that’s how we earned our money before we could actually get a part-time job. I had to go across town to do that and my grandma lived across town so my personal challenge was to ride to her house and back and see if I could go without having to stop.

Then in college, I rode a little bit, but then I got out of it. Work and life took over, but as I got older I realized that I needed to get out and get some exercise. So I got a nice new bike and next thing I knew, my son wanted to tag along with me. I took him out on his first full non-kid training wheel bike – it was this real heavy 24” mountain bike – and I kept going and he just kept coming. I kept asking, “do you want to go back?” but he insisted, “nope. Let’s keep going”. I very quickly realized that he had the endurance and stamina so I thought, ‘let’s see how interested he is in this?’

My son Ian’s entry into cycling was basically by virtue of me riding and him just hanging out. He has always been a pretty active kid, and he also has a sensory processing disorder – he is on the autism spectrum. A lot of kids on the spectrum have a high energy level. They are seeking input to level out their wiring and get them on an even keel. Team sports can be tough for him to navigate since he is on the spectrum, but cycling is a good sport for him because with cycling, you’re part of a team but it’s still an individual pursuit and there are individual successes a lot of times. It makes more sense for him to pursue cycling.

We started by getting him into a pretty grassroots team. They provided some bikes and things and it was kind of a low cost way to get into the sport. He started racing and going to camps and he was starting to do really well so we basically outgrew that team and got onto a more competitive one. We started getting him better equipment, access to better coaching and things like that. Right now he races road, cyclocross, and track and he is just getting into mountain biking. He likes it all. He will go race any race that there is. Rain, snow, sleet. If he gets super hot or super cold he might complain and he will complain about hill climbs, but he will do it. If it is on the bike, then he will do it.

He wants to be on his bike all the time. Even when he is home he will hop on his bike. It gives him a sense of freedom similar to what I had when I was a kid. Even though he is on the spectrum, he is old enough and responsible enough to have freedom. We live close to an outdoor mini mall so he will ride his bike up there and just hang out with friends. In his English class at school they were learning about goals and tracking them, and his goal was to ride his bike to school for thirty days; so, he did that. He just wants to be on his bike. He won four state championships this past season and he has been on the podium quite a bit, but for him it’s not really about that. He just likes being on the bike and being around what he sees as peers or equals despite his disability.

It has just kind of become a lifestyle for Ian. He will watch or just pull up races on YouTube and I will ask, “what race are you watching?” and he will say, “oh this is a race from two years ago” or “this is…” some obscure race that I had never heard of. He will just come in my room and blurt out “so and so just won a race” or “so and so’s time was…” He follows it pretty closely and it gives him a good outlet. Like any other kid his age, he definitely gets into the typical things like video games and stuff, but this I see this as a healthy obsession because it has that aspect that he can follow, but it also has the outdoorsy-exercise aspect. And it gives him something to focus on and something to feel good about – successes. It also gives him something to work towards and look forward to. Like I said, it is not so much the bike riding itself – which is a huge part of it – but it’s all these other little pieces that splinter off of it.

One of those things is the connection it brings to me and him. Cycling is kind of our thing. Dad and him will go to races. Dad and him will go to multi-day bike events out of state and things like that. We went to Cyclocross Nationals in Reno and he had a blast because it was a bunch of his buddies – it  wasn’t totally uncharted territory. We hung out for three or four days and for him it was like a huge vacation. Since I knew the other kids and their parents, I knew he could just go and do his own thing and be his own person while I hung out with other parents. That is how it is at most events here. My wife will kind of give me a hard time when we go to races, asking “when will you be back?” I always say, “I don’t know. It is based on him.” And it is true. We will go about an hour or two for his race, get him warmed up, get his number and then he will want to stay until the very end or even help volunteer – tear down course tape or hard barricades.

Also, cycling gives him a lot of self-confidence. It’s kind of funny – I’ll see him grabbing things from his room to take to school – whether it’s a medal or jersey or something like that. Bragging rights with friends and things to kind of give him that sense of equality or sense of accomplishment. Camps are especially great for that! If there’s a camp or a big event – that is huge for him. He wants to do every single one. The state association has gotten involved with the Velodrome in Colorado Springs and they do track camps down there, so we will go and he will go eat at the Olympic Training Center and hang out. Just bike stuff. It is that whole comradery of hanging out with peers. The camp also gives him a sense of independence. He is getting pretty independent and he can go to an overnight camp but I’ll go and chaperone and be there because it means so much to him and I know that they need volunteers. So I’ll go help and do my part and then I’ll tell him, “I’ll see you at dinner. We’ll touch base”; but really, I pretty much don’t exist. I will tell him, “you know the lay of the land. You know what to do. I’m here if you need me but just go do your thing”. So he will just go and hang out and it gives him this sense of empowerment of ‘hey I’ve done this before’. Not in a bossy way, but he will tell kids, “oh yeah you need to put your bike over there” and “you need to do this” and it kind of gives him some leadership experience as well. Ian has enough familiarity with the camp that I can imagine him potentially stepping up and saying things like, “hey you guys are in this group” or “I’ll be the lead of this group. I’ll do a lead out on the track” or things like that. So he is kind of a peer leader now. And that is huge.

Cycling is definitely a lifestyle now. We are lucky to be in the position where we have a great state race association that supports juniors and to belong to a great team – Avout Racing – that has great sponsors and is also very supportive of juniors. We also can’t wait to race at Mountain Bike Nationals in Winter Park, CO this summer since it is basically in our own backyard!

Robert Edwards got into cycling during middle school. He is a father of two and spends time taking his son Ian to races, volunteering for race directors and for the Bicycle Racing Association of Colorado. Ian is 13 and races with Avout Racing. When not on the bike, he plays basketball for his middle school, and enjoys sports and video games. 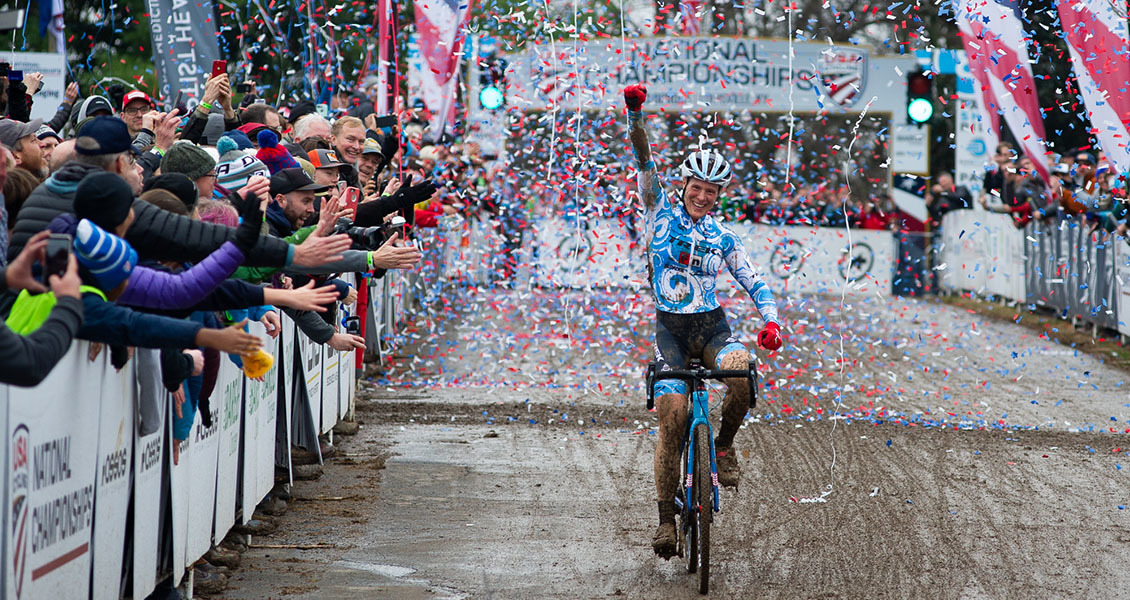 “I spent almost 20 years trying to figure out why my legs hurt."