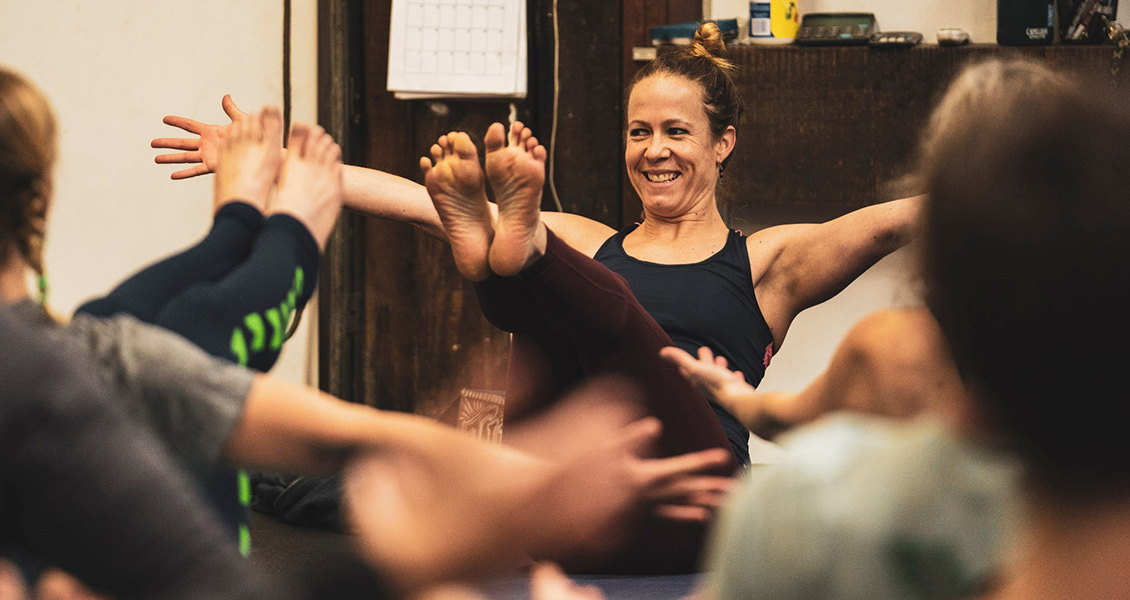 If You Build it, They Will Come

Here Lacy shares the personal benefits she gained from engaging with yoga, and how that sparked her interest in sharing it with others. What started as her leading a few adhoc classes for friends in her “tree house” has now evolved into a twice-weekly yoga class attracting local cycling enthusiasts in Bellingham, WA.

We are living in a strange time. It’s a cocktail of anxiety, fear, uncertainty, and topped off with a big old garnish of WTF. As someone who actively practices and sometimes struggles to stay on the healthy side of anxiety, I am hyper aware of how easily I can tumble over to the dark side. I’m finding it’s ever more important to keep active and clear my head while we watch the world deal with the pandemic. Are you on board? Here’s a long story about how I can help you.

Another lifetime ago I stumbled into a Florida yoga studio at the urging of my girlfriends while visiting my hometown. It was probably 2002 and I was fresh out of the University of Washington. I was hellbent on snowboarding, riding my skateboard, and going as fast as possible on my road bike. “Slow” wasn’t in my vocabulary. Live fast and die…later. Alas, yoga seemed like the farthest thing from fun, and yet here I was giving into the “C’mon! Just try it! You might like it,” cries from my friends. Sigh. Fine. One hour wouldn’t kill me.

The 60 minutes that followed were a mixture of sweat, emotion, struggle, defeat, and in the end—a revelation. Yoga was effing hard! I was tired. I was dizzy. I was hooked. I returned home to Seattle curious to try more of this yoga stuff. I began taking classes at Gold’s Gym and I remember the teacher playing the Foo Fighters, which I found interesting and unconventional. As I continued to practice, I sought out more intense classes and more seasoned teachers which led me to Yoga Life in Seattle. I immersed myself in as many challenging vinyasa classes as possible, all the while still snowboarding, and also diving headfirst (not always on purpose) into mountain biking.

My personal life was a cacophony of struggle for a few years. I was navigating depression, anxiety, and some big life problems that are still too hard to talk about publicly. Yoga kept me sane. I was taking between 7-10 classes a week. I idolized my teachers for their strength, grace, and humor in such a challenging environment. It’s safe to say I loved that space more than almost anything else in my life. It saved me.

When I had to make the hard decision to leave Seattle and, essentially my life, behind I cruised about 75 miles north to the mountain biking mecca of Bellingham. I had friends in town and felt welcomed right away but was struggling to find a yoga studio that really fit the style I had learned to love. The teachers in town were very good, but I never felt at home anywhere. I asked one of my former Seattle teachers to send me audio files of her classes so I could follow along with them at home. I started having a friend or two join me and we’d practice together. After doing this for months and months I thought to myself, ‘I think I could do this on my own…maybe.’

I used my friends as guinea pigs and we started practicing in my house, dubbed The Treehouse. It’s a tiny studio in the woods. We loved the space, but it was a bit too small, so we took the classes outside. 3, 4, 5 people would join. I learned what worked and what didn’t. They gave me incredible feedback. 6, 7, 8 people. Some of the ladies owned local bike shops and invited me into their spaces to teach. Fanatik Bike Company and Earl’s Bike Shop hosted several classes and our numbers kept growing. Eventually the owner of Fanatik, a gem of a woman named Kathy Salisbury, offered us a massive space behind her shop that was being leased by a gym.

It was cavernous and had a killer sound system. The word was getting out that there was a bike-focused yoga class in town, and it was free for anyone to join. I started seeing new faces, meeting new people, and this incredible community began to take shape. The classes grew by the dozen. We packed that big space like it was a sardine can full of dirty mountain bikers.

As the months turned warmer, we began to practice in a local park next to the bay. More and more people kept showing up. During an evening class someone counted 120+ people. I think I cried out of sheer disbelief and also because it meant everything to me that people loved this as much as I did. We created this community which was pulling people from all different walks of sports, as well as some folks that had never done an active thing in their life. One of the best parts of summer yoga in the park was that so many people rode their bikes to class. Cruisers, gravel bikes, road bikes, pub bikes, mountain bikes, eBikes—no bike was of place. Dogs, kids, babies, and random roller bladers would join in. It was for everyone.

It’s now been over four years since I started teaching these classes. We meet twice a week year-round. Our winter classes are held at a local cidery called Lost Giants. It’s a massive space that can fit about 100 people. It’s a fun respite from our long, dark, dreary winters in the Pacific Northwest. Our summer classes are held outdoors when the weather cooperates. It’s not unusual for people to show up with mud-splattered faces from riding the local singletrack.

Bellingham Treehouse Yoga was born for cyclists, but it’s been amazing to watch the community grow to include everyone. The best part of yoga is that it doesn’t discriminate. Everyone can benefit and I will keep teaching as long as I’m able. The movement here is strong. This is my field of dreams. The saying is true: “If you build it, they will come.”

I’ll be streaming all of my classes on YouTube during the Covid outbreak. You can find the channel here: https://www.youtube.com/channel/UCu4bX8vBXdCr8mxT2FJ47Jw?view_as=subscriber

Lacy Kemp is an avid mountain biker living in Bellingham, Washington. She’s been teaching free yoga classes to the Bellingham community for the past four years and practicing regularly for 18 years. Her goal is to get everyone stretching more often to help alleviate the potential for injury, while also making yoga fun, different, social, and enjoyable for everyone.