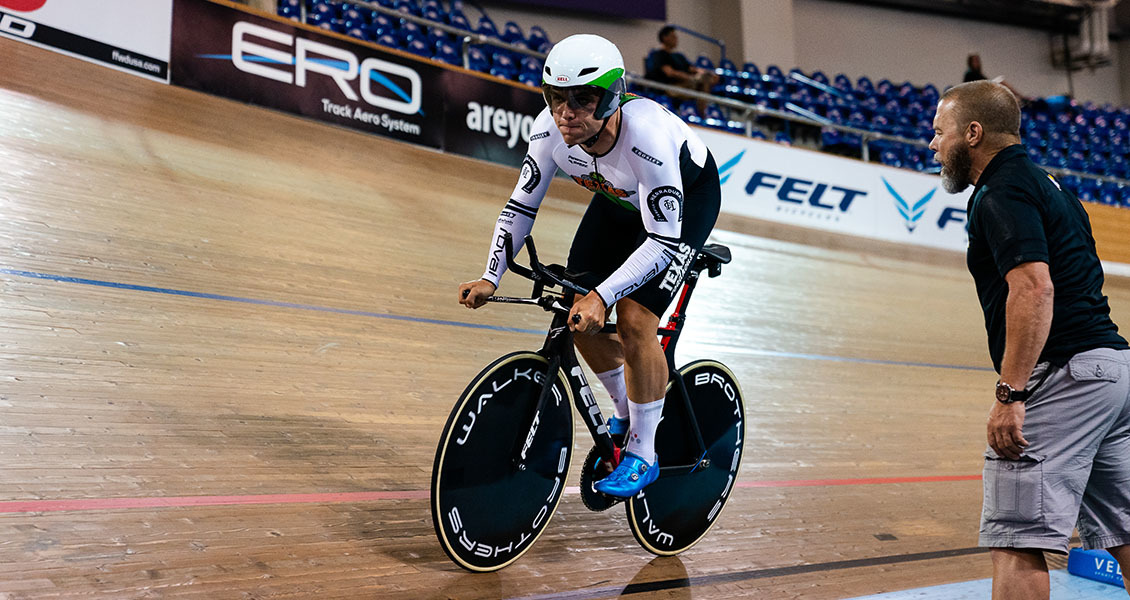 Training Tips
In Our Own Words
Culture
Encyclingpedia

USA Cycling Men's Team Pursuit member John Croom talks about his weight loss journey through cycling, and the peaks and valleys that came along that journey.

I decided to start racing bikes all because of a bike shop conversation – they said I couldn’t do it. That I was too big. To be fair, I probably weighed 300 pounds at the time. But yeah, there was this local bike shop joker and we got to chatting about how there was some local Friday night race and I was like, “man, if I could find a track bike I would do that. I’d give that a shot.” And he laughed at me and said, ‘you are too big to be going around in those circles. You are going to hurt somebody or hurt yourself’. I thought, “Yeah, I probably would hurt somebody but I don’t think I’m too big to be going around in circles”. He wasn’t completely wrong because my body started to say ‘you’re too big’ and started to lose the weight naturally just from riding around in those circles. My career basically started from bike shop banter.

I did my first Cat 5 race and it was the classic crash within the first lap. I got a little too excited and sure enough, I crashed. But one thing led to another. The weight started dropping, I started getting faster. In 2017 I had the opportunity to move to Colorado Springs and start training with the National Team and their new Men’s Endurance Program which led to winning my first National Title that same year. That was great, and I went on to win that same National Title in 2018 and 2019. It wasn’t all rosy though - there were a lot of low points for sure. One being that we didn’t qualify for the 2020 Olympics; that’s the big low point. But throughout the years I missed Pan Am Championships a few times, I missed World Cups and World selections a few times but I finally got selected for one of my first big international events with the 2019 Pan Am Games. To be able to race Pan Am Games and the level of event that was – only happens every four years – that was huge. To then to win that with a bunch of guys that I’d been training with since 2017 and to go on to set the national record with the same guys? Even with all the setbacks and all the low points, those are feelings that I would never trade. I would have 100 more of those low points just to have those two high points that were given to me because of USA Cycling. That was an incredible experience and it’s something I wouldn’t trade for the world.

I do think it is important to talk about my experience with weight loss, because it has been a process that has had major highs and major lows. At first, the weight loss happened pretty naturally, but then I kind of stalemated. At the same time, I was learning from athletes about rapid weight loss movements and I did ultimately develop a few eating disorders, which was a scary low point. It is especially hard to think about it now because at that point I was a Cat 3 cyclist – I was not at the level I am now. I just looked around me and saw what these other guys were doing and I thought it was going to make me better but, in reality, it made me slower. It made me lethargic. Although I tried every diet that was out there, I did eventually hire a nutritionist and that was a game changer. My nutritionist had me eat more and as a result, I started losing weight! Go figure. It was pretty shocking and impressive. By eating more, my energy went up and my weight went down. I know I am not the only cyclist who has dealt with weight issues, and I think it is important to talk about – to know that you are not alone. My advice to someone who is thinking about coming into the sport but doesn’t necessarily feel like they fit the body stereotype is, understand that you’re going to be who you are going to be. AND you can only be as good as you recover. So you can only train as hard as you recover. You almost have to recover harder than you’re training. If you’re not emotionally healthy with your diet and self-being, it is honestly going to be hard to be healthy with bike racing. Trust me, I know. I’ve lived it. It is kind of that ‘love yourself before you wreck yourself’ scenario. Understand that when your health starts to become an issue and a talking point, it’s time to reevaluate. You would be shocked to see what you can achieve with just relaxing and focusing more on the bike than on food. Honestly, I was more caught up with what was going into my body than what I was doing on the bike for training. It’s not like I was doing a ‘Who Cannot Eat the Longest?’ contest! I was doing a ‘Who Can Be the Fastest on the Bike?’ contest. So instead of thinking, ‘I’m not going to eat because that’s going to make me go faster uphill’, in my experience, riding up hills is probably going to be a much more effective strategy!

When I stop and think about what got me to where I am now in my career, I honestly think the most significant thing has been me taking every opportunity that was presented to me. I am not a guy that takes ‘no’ for an answer. I would often be told ‘you’re not ready’, and my response would be, “well how am I supposed to be ready?” They would come back with, ‘you’ve got to do these races’ and of course that would be the races they just told me I couldn’t do! But that didn’t stop me. I took every opportunity I could get. If there was a race within driving distance, I was there. I would find a way to make an opportunity work. My approach from day one has been to never turn down an opportunity to race my bike. Never turn down an opportunity to explore and ride. Always ride with someone that is better than me. That has been important because not being good enough has been a big low in my career. I have had a tendency to rush the process and I have had to accept that sometimes it is just not going to happen. It’s not my time. That is hard to swallow. But I have just kept fighting and sure enough I got my opportunity in 2019 to race Pan Am Championships and Pan Am Games. After a couple years of missing selections for major events, now I’m getting my opportunity to race some of these races that were my low points in years past. So that has been a huge opportunity for me. It is crazy to look back and realize that my low points – other than the unhealthy dieting – have consistently turned into high points. I always try to look for the positive in every situation because at the end of the day we are human and things happen right? So yeah, long story short, I try to turn my low points into my high points.

On that note, the highest points in my career – the things that really stand out – are honestly the relationships that I’ve made throughout it. The team now is a solid group of ten guys and we have shared low points and high points together. I not only got to be beat by Ashton Lambie multiple times, but I also got to watch him break the World Record three times. I also got to watch Daniel Holloway win an Omnium World Cup. And I got to watch Gavin Hoover get 5th place in an Omnium World Cup at the age of 22. I also got to watch Jennifer Valente completely dominate the women’s track scene over this last year and I trained with her last year leading into Worlds. Hopefully one day we can come somewhat close to the success of women’s program! I feel like they can sometimes be so underrated. Those women are amazing! Some of them are my heroes in themselves! It’s just super cool to be a part of this program, a part of USA Cycling. When I think about where I started to where I am now, I feel super lucky to be a part of this program. I have had the chance to witness these athletes grow and develop. I wouldn’t have had that opportunity without USA Cycling and this Endurance Program. So that’s probably the highlight of my career – just witnessing everyone around me and me getting better alongside them. My fastest 4k before the Program was a 4:50 and now I’ve done a 4:17 at altitude. I’m a completely different athlete now. I grew throughout the Program and I watched other athletes grow. I am so excited to see what we can do in 2024. And what those women are going to do in 2020.

The last thing I want to say is, if you are thinking about getting into cycling, the best advice I can give you is: Listen. Ask questions. Ask questions and listen. There is so much that you can learn. Even if you are winning bike races, there is always something that you could have done better or you could have done or handled differently. When you are getting started in cycling or thinking about getting into cycling, no question is a dumb question. Just ask questions and listen. I think that’s where you’ll see quick success. That would be my main advice. Ask questions.

John Croom began racing in 2010 at the Giordana Velodrome in his hometown of Rock Hill, S.C. Since then Croom has competed on both the road and track, claiming national titles in the 1,000-meter time trial for three-years consecutively, as well as being a member of Team USA’s Men’s Team Pursuit squad who won gold at the Pan American Games in 2019 in Lima, Peru. 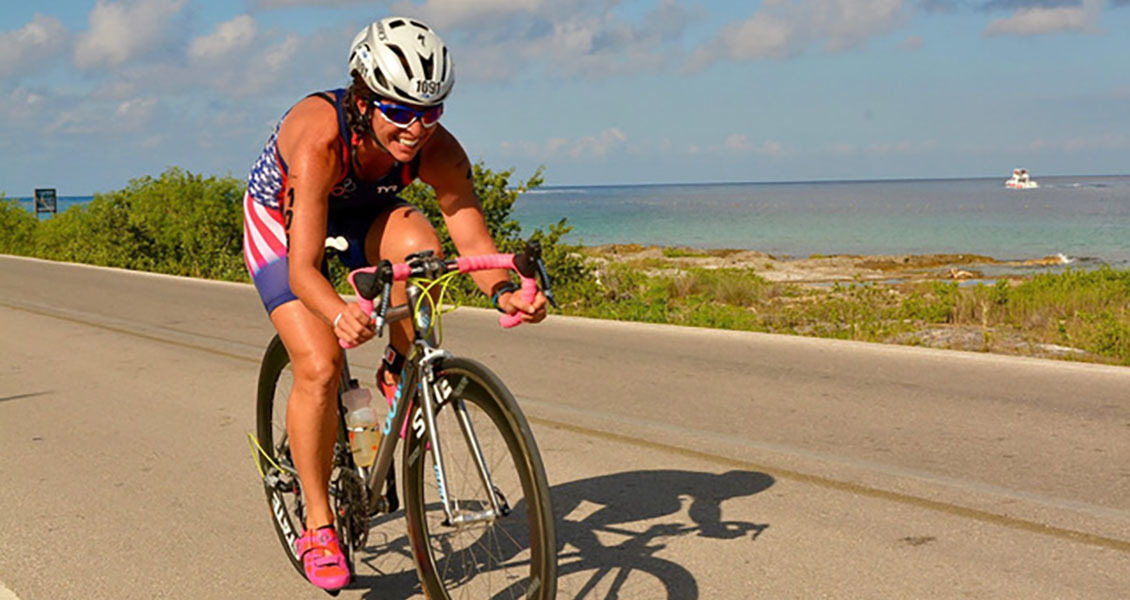 “When I would be out there, for some strange reason I never thought it could happen to me"