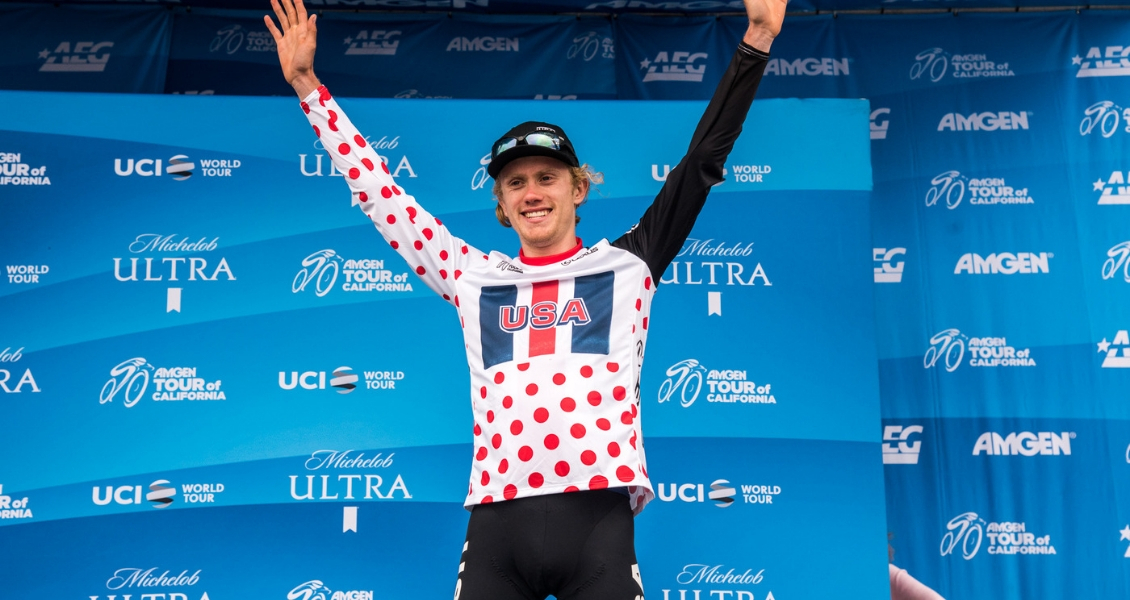 For three straight days, the USA Cycling National Team, the composite squad featuring riders from development and continental riders, is pedaling through the Amgen Tour of California like they’ve spent years together in training camps and on the racing circuit.

During the 129.2-mile stage 3 from Stockton to Morgan Hill, it was Alex Hoehn (Lenexa, Kan.; Aevolo), the 2018 U23 road race national titlist, who emerged in a several-hour break with Rémi Cavagna (Deceuninck-QuickStep) of France, the eventual stage winner.

Hoehn won three King of the Mountains in the race placing second in the others, which included a solo effort over Mt. Hamilton, the

HC climb outside of San Jose. He now leads the King of the Mountain general classification with 31 points, one point ahead of Cavagna. Hoehn was absorbed in the final two miles before finishing with the main field.

"It was an extremely hard stage today," said Hoehn. "The stage was really hard, especially going up Mt. Hamilton all alone, I was disappointed to get dropped, but Remi is a very talented rider. I have nothing to be upset about."

In the opening stage Sunday, Tyler Stites (Tuscon, Ariz.; Aevolo) rode in a long breakaway along the Sacramento Delta before sitting up to conserve energy. In stage 2, Michael Hernandez (Clermont, Fla.; Aevolo) also emerged in a long break before being absorbed into the main. The three breakaway riders and three other teammates on the squad are all ages 21-24. With Travis McCabe (Denver, Colo.; Floyd’s Cycling), 30, who finished second in stage 1, USA Cycling is fielding a team in the country's most prestigious event for the first time since 2007.

"We definitely give it our all out there," said Hoehn. "When we’re are racing against the best in the world we are just not going to back down just because there are World Tour teams out there.

"We're not go to take it easy or go easy. We are definitely going to give it everything we have. Every single day our team has done really well and I am really excited to be a part of the program for this race."

Team director Mike Sayers said before the event his squad was going to approach the events as seven individual races. It's done exactly that.

"Like I said, we are taking it day by day," said Sayers. "So far, the days have gone well, clearly. We are plugging along here. Everyone is contributing. Travis has really become an incredible leader. He's done a lot of heavy lifting in addition to leading the team. The young guys are putting it out there very clearly."

Like Sayers, assistant team manager Mike Creed, a former long-time pro rider, said that while the team is new, teammates' previous relationships have helped its success.

"It's a small pool; everybody knows each other," Creed said. "We're definitely on the upper ends of expectations. Again, were are playing with house money. If you go into to a casino and it's given you $5,000, and you walk out with $5,000, you didn't win anything. Playing it safe is silly."

McCabe, the National Team’s road captain, finished 11th in the stage after staying in the lead group and nearly winning the bunch sprint, proving once again that he is not purely a sprinter. He is 29th overall, trailing by 1:01 and the highest-placed rider National Team rider.

American Ben King (Dimension-Data) was second, 7:11 behind the winner. Simon Geschke (CCC Team) of Germany was third in the same time. The stage was the second of three straight long road stages, all slightly less or slightly more than 130 miles. Stage 3 featured categorized six climbs.

This year’s National Team presence at the Tour of California was made possible with the additional support of JustBARE Chicken and VolvoUSA.