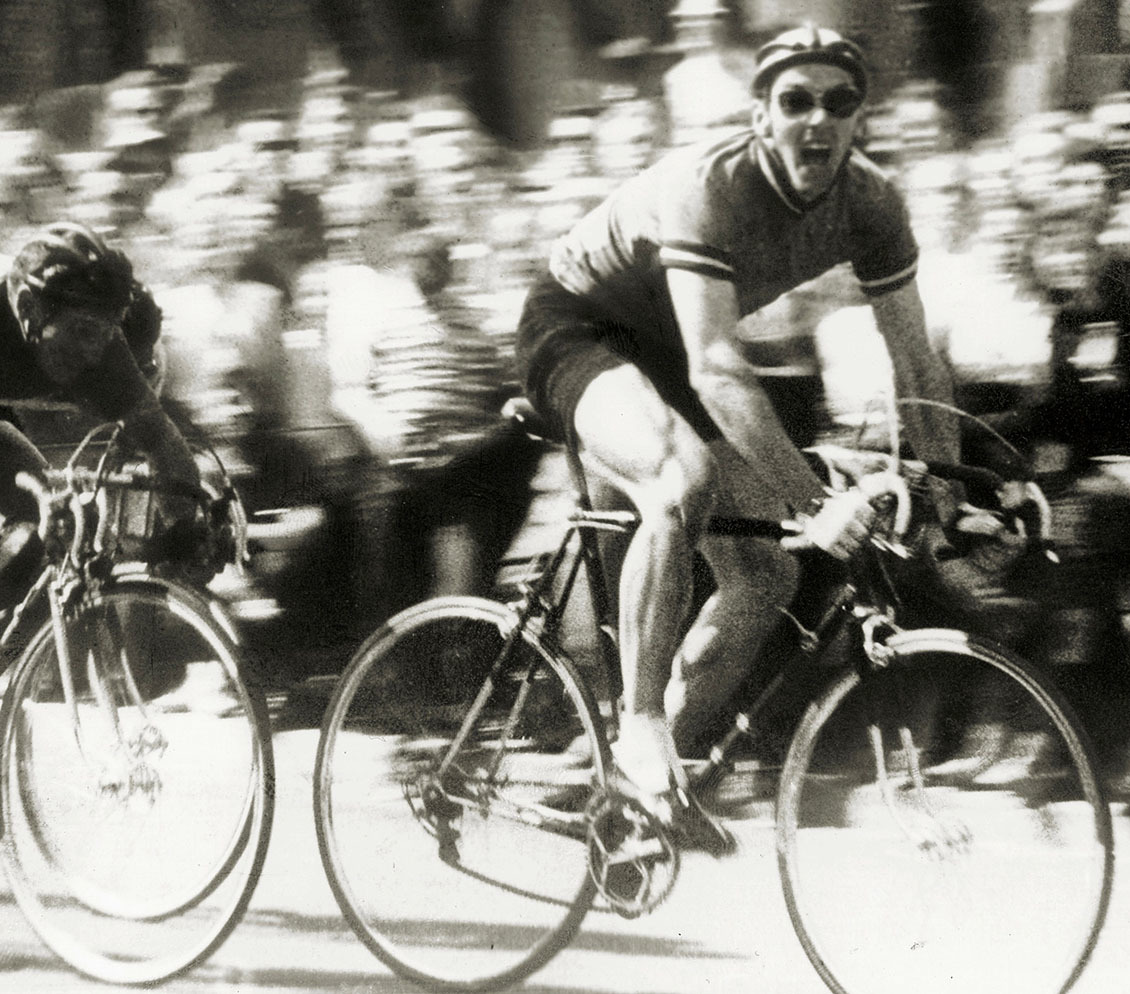 USA Cycling is pleased to partner with author Peter Joffre Nye to showcase a slice of the history of cycling in the United States. Peter is a prize-winning writer, author and co-author of eight books, writer of a documentary film, and his work has been broadly published in numerous newspapers and magazines, including The Washington Post, USA Today, and Sports Illustrated. Peter has also served as Historian and a board member of the US Bicycling Hall of Fame since 1988 on the Nominations & Selection Committee. Avid fans of cycling will be familiar with his book Heart of Lions: The Story of American Bicycle Racing, published in 1988.

This article was adapted from the Thirtieth Anniversary Edition of Hearts of Lions: The Epic Saga of American Track and Road Racing, coming out in 2019.

​“Death is no big deal. Living is the trick.”—Red Smith

The 1950s are often recalled as a decade of the bland leading the bland. Not Art Longsjo. He energized American cycling on his way to becoming a New England legend. His name endures in the Fitchburg Longsjo Classic, one of America’s longest-running annual events on the USA Cycling American Road Calendar. New England Crit Week starting on Sunday, June 24 in Greenfield, Massachusetts, will finish with the 57th annual Fitchburg Longsjo Classic on the weekend of July 1 and 2 in nearby Leominster and Fitchburg.

What had started out in 1960 as a memorial race in Fitchburg, an old mill town in north-central Massachusetts, to honor its favorite son, was designated by USAC in 1980 as the Fitchburg Longsjo Classic.

Arthur Matthew Longsjo, Jr., grew up speed skating on frozen ponds, lakes, and indoor rinks around New England. His mother, Ann, taught him to speak Finnish. She told me that one word characterized him—sisu, for guts and determination to persevere through adversity and failures to reach a goal.

When he wanted to quit high school to train full-time for the 1952 Winter Olympics, his parents were wary about his dropping out of school at sixteen—more education improved job prospects and economic mobility. His mother understood his dilemma. She had left home in Michigan at sixteen in the late 1920s for the bright lights of New York City to try her luck as a dancer. She waited on tables in restaurants to pay for dance lessons. A chain-smoking classmate was Bette Davis. Ann regarded her as stuck up and hopelessly clumsy.

“Bette Davis was the worst dancer in our class,” she told me. “No talent whatsoever. But she never let that bother her one bit.” Davis pushed her way to one of Hollywood’s great film stars. “I thought my son showed a similar drive. He could go from skating to something greater.”

Longsjo stood a lean 6 feet 1. His parents came up to his chest. He had a light-olive complexion, broad wire-hanger shoulders, chestnut hair, and sharp but not delicate facial features. He was the protective older brother to sister Penelope and brother Tom.

After he was selected as alternate for the 1952 Winter Olympics, he took up cycling as a way to stay fit in warm weather. The two sports share similar leg drive and the same muscles. He won a trove of skating titles around the country, including the North American Speed Skating Championship, by the time he entered the 1954 Amateur Bicycle League of America (ABLA) national championship in Minneapolis.

The ABLA, predecessor to USA Cycling, held only one national championship, a weekend program every August of four competitions on one-speed track bikes for men, junior boys, and women. The titles were based on points awarded to the top five finishers in each competition.

At the 1954 nationals in Minneapolis, Longsjo finished third in the 12-miler, second in the 10-miler. During the 1-mile, he rounded the final turn in good position in the pack when his bike went out from under him. He fell and slid on asphalt. When he scrambled back on his feet, both elbows and one knee bloodied, he discovered the worst damage—both tires were ripped from the rims.

He grabbed his bike and ran, click-clicking in bike shoes with steel cleats on the soles, 150 yards to cross the line in fifth. That earned him points for fourth place in the nationals.

Weeks later in eastern Canada his legend began in one of the most prestigious cycling races in North America—from Québec City 170 miles away to city hall in Montreal. Out of a field of ninety, he joined an early breakaway of ten and stoked the pace. More than seven hours later, the leaders battled toward the finish. Longsjo outsprinted his rivals to win by five lengths. He lowered the course record by seven minutes. The Association des Cyclists du Canada named him Canadian Cyclist of 1954.

The next year Longsjo captured the 5,000-meter time trial at the speed skating Olympic trials in Minneapolis. He earned a spot on the U.S. team bound for the 1956 Winter Olympics in Northern Italy’s Cortina d’Ampezzo. He finished out of the medals, as did his teammates.

He focused on the Olympic road race cycling trials in September. The 120-mile race on a circuit around Lake Merced in San Francisco ended with Longsjo finishing second in a sprint among breakaway partners. He clinched a berth on his second Olympic team.

Longsjo went to the Summer Olympics in Melbourne, Australia as a member of the cycling team. He became the first American to compete in two Olympics in the same year. Much to his dismay, team officials shifted him from the road race to the 4,000-meter team pursuit. His squad was eliminated in the first qualifying heat.

“He was not recognized for his accomplishment of making two Olympic teams in one year,” observed Don McDermott, a three-time Olympic speed skater on the Winter Olympic team with Longsjo. “It was as though it was swept under the rug.”

Nevertheless, he looked ahead to the next Olympic road race.

Longsjo had a penchant for wry humorists. including Sophie Tucker, a vaudevillian renowned for telling television audiences: “I’ve been rich and I’ve been poor. Rich is better.” He also played practical jokes. A memorable one talked about for years took place in the Canadian national road racing championship, years before the ABLA held one. The course in southern Québec tested more than 100 riders through the rugged Laurentian Mountains. After riding in the pack for more than an hour, Longsjo spotted Mount Savage looming up 3,825 feet.

“Art got out of his saddle and began sprinting as though the finish was only 200 meters away,” remembered Canadian national team member Guy Morin of Montreal. “We had more than 80 miles left. And he’s sprinting madly down the road. I began yelling, ‘You crazy Américain! It’s too early!’ He didn’t listen. All the rest of us decided, What the hell, let him go. He’ll run out of steam. His lead got bigger and then we lost sight of him.”

At the summit gathered a group of spectators and reporters. Morin’s trainer, Fioro Baggio, a retired pro from Italy, waited at the top. Baggio watched Longsjo solo up without anyone else in sight. Then Longsjo removed his feet from the pedals, dismounted, and walked with his bike like a tourist sightseeing and stopped in front of Baggio. Longsjo said he was looking for Mount Savage. He asked for directions.

Baggio looked at him for a moment. According to Morin, “Baggio smiled. He said, ‘I think you just passed it.’”

Baggio imported Torpado bicycles from Italy for his shop in Montreal. He sponsored Longsjo and gave him a new eight-speed Torpado.

After the Olympics, Longsjo and his fiancée of five years, Terry L’Ecuyer, finally married in Fitchburg. They were both twenty-five. She was a tall brunette, wore her hair short, and worked as a medical secretary. They went to Boston for their honeymoon.

“We didn’t have any money,” she said. “There wasn’t money in those days from the races. I remember once Art won a six-pack of Cokes. And that was in New York City.”

They moved into a triple decker Victorian house with his parents.

In 1958 Longsjo had his best season, winning all the major races he entered in Canada and the United States. Photos show him sprinting with his back low, elbows bent, pulling the handlebars like a weight lifter seizing a heavy bar.

His biggest U.S. victory was the 50-mile Tour of Somerville, a Memorial Day criterium in northern New Jersey’s borough of Somerville. On a long, flat downtown finishing straight, he charged to the front of the pack from 350 yards. A big crowd of boisterous spectators cheered. He won by a length over Ted Smith, an Olympian and three-time national champion.

His greatest victory was the Tour du St. Laurent, a 500-mile stage race in eastern Canada in August. It was a grueling event up one side of the St. Laurent River from Montreal to Québec and back along a circuitous route. The most ambitious cyclists in North America raced stages of 60 to 70 miles in the morning and 50 miles in the afternoon for four consecutive days.

Longsjo competed with Morin and two others on the Baggio-Torpado team. Longsjo won by 11 seconds. He led his team to victory.

He was invited back for the final big race of the season, from Québec to Montreal. It was the 25th annual event. The Canadian press corps compared it to the Stanley Cup in hockey. Longsjo’s wife couldn’t take time off from work to drive him. He asked several racing buddies to go with him, but they cited fatigue from the Tour du St. Laurent. He went with a 20-year-old friend as designated driver.

Early in the race, Longsjo joined five others dashing away. They built up a lead of six minutes on the pack when they reached Montreal. Longsjo surged ahead to win by three seconds. He stayed in town for an evening appearance on a local television show.

The next morning on the commute back to Fitchburg, Longsjo was asleep in the passenger seat, his 20-year-old friend at the wheel. As they cruised south through Vermont, the driver noticed a bee in the car. The driver swiped a hand at the bee as the car approached a curve. The vehicle smashed into a utility pole, which embedded in the passenger side.

Longsjo died that evening of severe head injuries in a Burlington hospital. The driver suffered a broken back.

Fitchburg’s mayor and local business leaders joined Terry Longsjo to commemorate him with a 50-mile memorial race wending through the city of 40,000. More than 100 riders from the United States and Canada competed. Thousands of spectators lined the course to cheer. Guy Morin won to honor his friend.

Through the years the roster of winners reads like an honor roll of the best talents. Connie Carpenter Phinney won the inaugural women’s race in 1977. Terry Longsjo presided over the first fifty annual editions.

This year’s Fitchburg-Longsjo Classic offers nine categories. The elite women and men professionals compete for equal purses, of $1,950 on each of the two days.

What has kept the Fitchburg-Longsjo Classic rolling are generations of local volunteers. “Art Longsjo is a legendary character in New England,” says race director Alan Cõté. “My dad, Joseph Cõté, was a friend of Longsjo. They traveled to races together. My dad rode in the first fifteen editions of the memorial race. Some of my very earliest memories are of the 1960s and 1970s watching my dad in the race. I grew up and competed more than fifteen editions as a junior and the men’s open. I want to contribute to keep the race going.”

Like Sophie Tucker used to say, “It’s not just how good you are. It’s how long you last.”

Peter Joffre Nye’s most recent book is The Fast Times of Albert Champion: From Record-Setting Racer to Dashing Tycoon, An Untold Story of Speed, Success, and Betrayal.