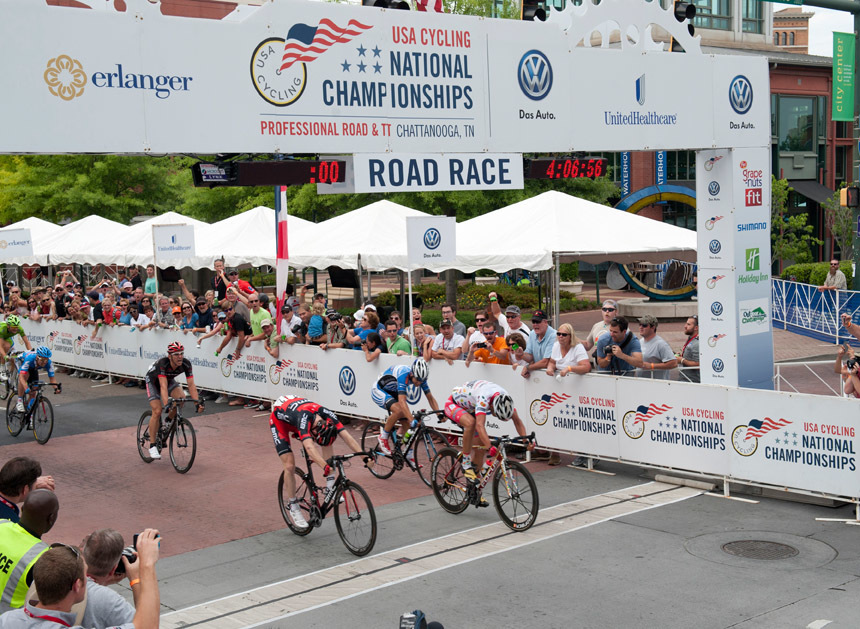 Freddie Rodriguez, “Fast” Freddie, has proof that the best-laid plans can come together. For the four-time U.S. National Champion, everything fell into place as he prepared for the 2013 USA Cycling Professional Road Championships.

“I was always known as being a more calculated rider,” Rodriguez admits. “I was always studying courses, studying my opponents and looking logically at what might happen in each race.”

His logical approach had been cultivated from his first days on a bike. As a 10-year-old, he attended the 1984 Olympic Games road race with his dad, who owned a bike shop and had been an elite-level racer in Colombia.

“I grew up in LA, so I was lucky enough to be exposed to the 1984 Olympics,” Rodriguez said. “I remember watching Alexi Grewal win the gold medal. I think that was probably my big queue to really get excited about the sport.”

Rodriguez began riding more regularly with his dad, spending weekends climbing mountains around Southern California. They would park near the base, spend several hours riding to the top of summit routes like Mt. Baldy, ride down and head home.

He didn’t think anything of the distance. “I just looked at it as that’s what you did,” he said, and he credits those rides with improving his endurance in longer races.

Rodriguez was also riding around the neighborhood with friends, using his bike simply for transportation and fun.

“I was basically on a bike since I can remember,” he said. “That was my youth. I would get home from school and grab a bike, and we would go to the park and play with friends. Summers we spent the whole time on bikes, just running from friends’ houses to fields and to whatever we wanted to do that day.”

An active kid, cycling was one of many sports for Rodriguez. He played soccer, swam, surfed, and joined his high school cross-country team. He was also racing his bike with area clubs and taking weekend trips to races in Northern California.

“I was always a really motivated kid. I wanted to be good at something,” he says. “I quickly realized that cycling was my favorite sport. I think it really had to do with the exposure to traveling and getting outdoors in a new environment. I was also just having fun with it and doing well at times, and there was never any pressure from my parents or from the teams I was with. It was a very fun environment to be involved in. Once I discovered cycling was going to be my tool, I got really excited about it.”

The “fun factor” was a big reason Rodriguez stuck with cycling. He enjoyed everything about the race weekend road trips, from piling in the van to pulling on the same kit as his teammates to the long drives.

When he hit the 16-17 age group, he was invited to start riding with the U.S. junior national team. His training program evolved, and his competition sphere expanded beyond California.

“That’s probably when I was ready to make the transition to making racing a focus – I knew it was something I had an opportunity to do well at,” he said.

Rodriguez’s career took off, and he was soon racing around the world. In 2000, he captured his first National Championship, winning the road race, and he successfully defended his stars and stripes jersey in 2001. He followed with his third U.S. tile in 2004. It was his fourth win that didn’t quite come in the same succession.

“People always comment that I won a National Championship in 2000, 2001 and 2004 and then had a huge gap, and they ask what happened?” he said. “I reply that along came Aidan in 2005, Isabella in 2007, Max in 2009, and then I came back. I got busy with family and kids and was concentrating on that. Finally, around 2013 was when the kids were getting older and I wanted to make another attempt at racing at a higher level.”

His approach to the National Championships race in 2013 was a bit different. He was entering the event without having raced nearly as much in the lead-up as he had in previous years. But, that’s where his calculated approach played to his advantage.

“When I went to the race I set up a plan with the team, and basically the race happened how I had envisioned it,” he said. “I knew I was low on my exposure to high-level racing, so my training in the lead-up to nationals was very specific and very tuned to making sure I maximized building my aerobic capacity knowing that was going to be my biggest deficit from not racing for so long. Leading into that race, I knew I had to calculate everything perfectly, know my competition, know how hard the course was. I laid out a plan and literally executed exactly how I expected.”

In the midst of his racing career, Rodriguez aspired to do more with the sport. He wanted to share his enthusiasm and knowledge.

In tandem with racing, Rodriguez had studied the business side of the sport and put those learnings into action. When one team folded, he started his Fast Freddie Apparel line. He also launched the Fast Freddie Foundation, a non-profit that uses cycling to inspire young people, teach life skills and encourage a commitment to education, healthy lifestyles and physical activity.

“We give bikes away to kids, and hopefully they’ll be able to see the bike as freedom, as a tool to get to school, to ride to meet up with friends, to get to work and to experience the health benefits,” Rodriguez said about the work of his foundation. “That’s where I hope to make a difference. It’s not even about making champions. I strongly believe champions make themselves. We work hard, we persevere. We need to create the opportunity for more kids to be champions, and for more kids to be out there riding bikes, more opportunity to be doing healthy activities.”

After he retired from racing, the business side of the sport became his focus. He also began joining charity rides and sharing his love of cycling at speaking engagements.

“One of the biggest things I do now is help build awareness of the health benefits of riding a bicycle and getting aerobic exercise,” he said. “I’m working with Amgen as an ambassador for their Breakaway from Heart Disease program. And, our goal there is just to get kids to enjoy a healthy activity.”

Rodriguez is working to instill that same understanding with his three kids – Aidan, age 13, Isabella, 10, and Max, 8. Together, they’re riding from their home in Berkley, Calif., to school every day, learning to appreciate the sport and embracing the fun of cycling.

One of the next big rides on Rodriguez’s calendar is the 2018 L’Etape California by Le Tour de France ride. The event was postponed and is now scheduled for Sunday, October 28. The course in and out of Folsom, Calif., will take riders of all abilities along a challenging course in the Sierra Foothills. New this year, two route distances will be offered: riders can experience the full ride through 90 miles and 7,500 feet of climbing, or a shorter ride across 60 miles and 4,000 feet of elevation gain.

“L’Etape is a fun ride where you get everybody involved – from the recreational athlete just looking for a challenge to high-level recreational riders who want to get a result,” Rodriguez said. “For me, it’s an opportunity to ride with a diverse group of riders of various levels, and to be able to talk to everyone, educate, and inspire. It’s also a great time to come and see some of the Amgen Tour of California riders, past Tour de France riders, and just have fun on the bike.”

For Rodriguez, cycling always comes back around to having fun. Even in those more calculated races, he recognized the joy he felt, and it’s those same feelings and enthusiasm that he continues to pass along to the next generations.

“The sport has done a lot for me – it’s my life, it’s what I still live and breathe every day,” he said. “It’s a beautiful sport, and I want to pass on the knowledge I’ve gained.”