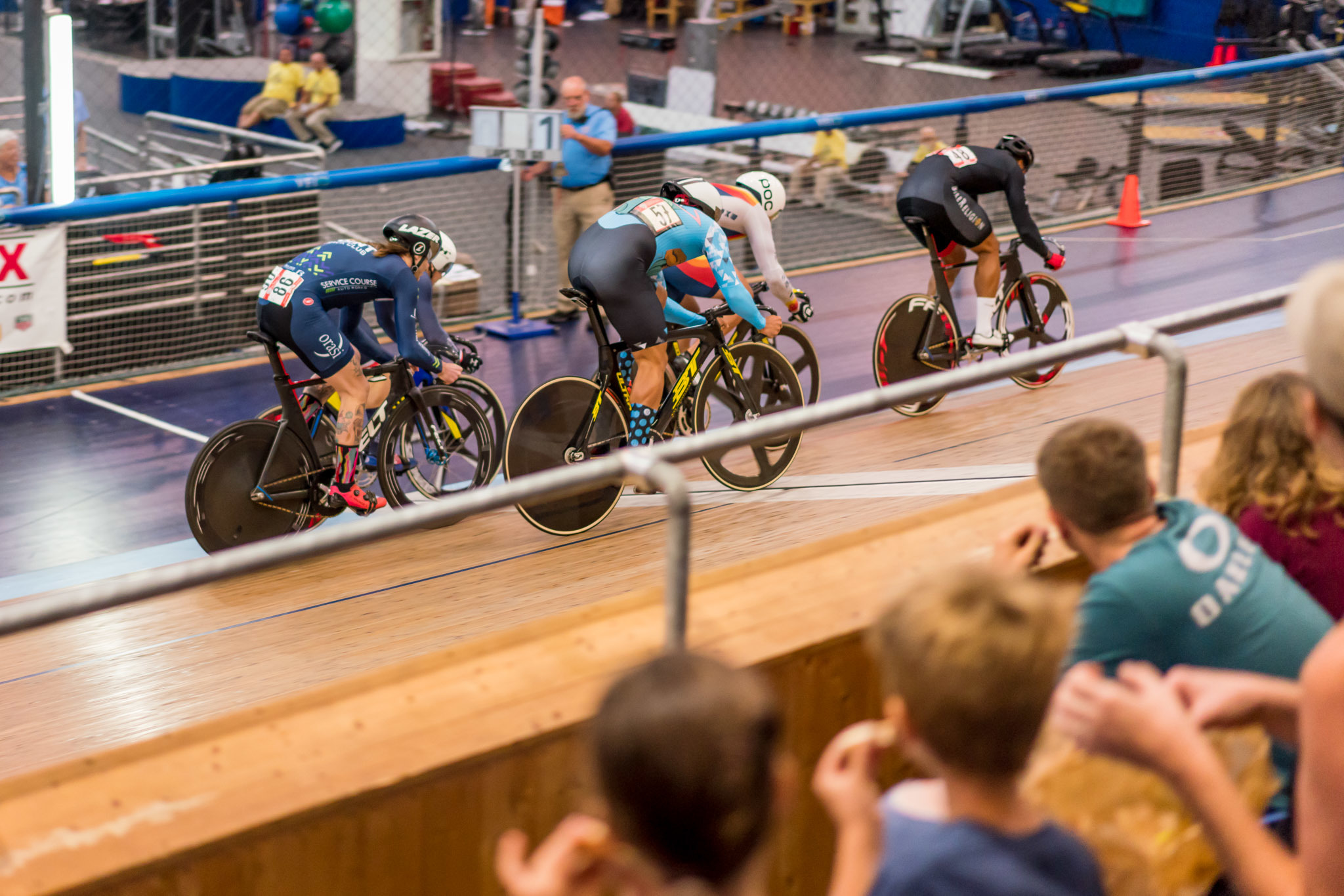 CARSON, CALIF. AUGUST 4, 2018 — Day two of the 2018 USA Cycling Elite Track National Championships brought us fierce competition and personal triumphs. There were riders earning their first stars-and-stripes jersey, and some riders who were adding to their collection of hardware. Old rivals met again, names from the past made an appearance, and new riders made a name for themselves. There were six titles awarded over four disciplines of track cycling.

This morning’s session began with the qualifying rides of the women’s Sprint event. The nine athletes vying for the eight spots available in the tournament took to the track to prove their mettle. Coming out the 200 meter qualifying Madalyn Godby (Colorado Springs, Colo.) was the highest seed, with a time of 11.299, and would eventually go on to take the gold for the event through three rounds of sprinting. Mandy Marquardt (Allentown, Pa./Team Novo Nordisk) claimed the second highest seed, clocking a time of 11.372. Said Godby about racing against Marquardt, “Mandy’s a tough competitor and so we’re always at each other. We’ve been at each other for the past couple of the years. So it was really awesome to come away with the win against her.” Fifth-place seed Ivy Koester (Los Angeles/Velo Club LaGrange) was able to provide several upsets in her sprint rounds, to finally claim the bronze medal tonight.

For the men’s Keirin, twenty-two starters took to four heats of preliminary racing. Whittling down to the final six to take the start of the final, it was Joe Christiansen (Lyons, Colo./Start Track Racing) who came out victorious. Christiansen, who started racing mountain bike when he was twelve and has since transitioned over to track, talked about what this title means to him, “Ever since I started when I was twelve, mountain bike racing, it’s like, always been working towards this. I’ve gotten silver many, many times. But yeah, getting gold was a huge step. A lot of that was thanks to development with USAC, starting with the mountain bike side, and then in these last few years training with the team on the track.” James Mellen (Schnecksville, Pa./Sprinter's Edge Track Development Team) was able to hold out for second, over the attack by Giddeon Massie (Los Alamitos, Calif.) who ended with the bronze.

In the men’s four kilometer Individual Pursuit, coming out of the qualifying rounds this morning, the first and second seeds were separated by just over four-tenths of a second. Ashton Lambie (Lawrence, Kan.) clocked a qualifying time of 4:29.202, and John Croom (Rock Hill, S.C./Texas Roadhouse Cycling Team) posted a 4:29.616. Moving onto the finals, Lambie would stake a time of 4:27.497, fast enough to claim the title for himself. Gavin Hoover (Colorado Springs, Colo./Elevate-KHS Pro Cycling) qualified third in the preliminary round, with a time of 4:32.299. Hoover would move onto the bronze medal ride, and passed his competition shortly after the three-kilometer point, and earn himself the bronze.

Jennifer Wheeler (Seattle/Metier Racing) would prove the most dominant rider in the women’s three-kilometer Individual Pursuit. In qualifying rounds, Wheeler would post a 3:40.533, just shy of 11 seconds in ahead of her next closest competitor. Molly Van Houweling (Berkeley, Calif./JLVelo Cycling Team), would stop the clock at 3:51.221 during the preliminary round, seeding her in second for the finals. Wheeler and Van Houweling battle for gold in the finals, with Wheeler ultimately being the victor. Chelsea Knapp (Rochester, N.Y./CycleweRx of Rochester) would seed in third after qualifying, and ultimately capture bronze with a 3:56.337.

In what could only be called a tour de force during the women’s Points Race, Jennifer Valente (Colorado Springs, Colo./TWENTY20 p/b Sho-Air) would be the only rider to take a lap on the field.  Christina Birch (Los Angeles), would put up a fight, claiming 25 points during the course of the race for herself, which would garner her the silver. Junior national champion in the points race, Megan Jastrab (Apple Valley, Calif./iCademy) would win 16 points during the course of the race, earning her the bronze medal.

The men’s point race final Daniel Holloway (Boulder, Colo./Texas Roadhouse Cycling Team) would be just as dominant today, as he was during the International Omnium yesterday. In today’s racing, Holloway would take four laps on the field. He would finish with 97 points all together. Not to be out done by his coach Holloway, Colby Lange (Edwards, Colo./Texas Roadhouse Cycling Team) would earn 91 points for himself, which would be good enough for the second step of the podium. Shane Kline (Bally, Pa.) would add to his hardware collection from Satrurday’s omnium as well, taking third.