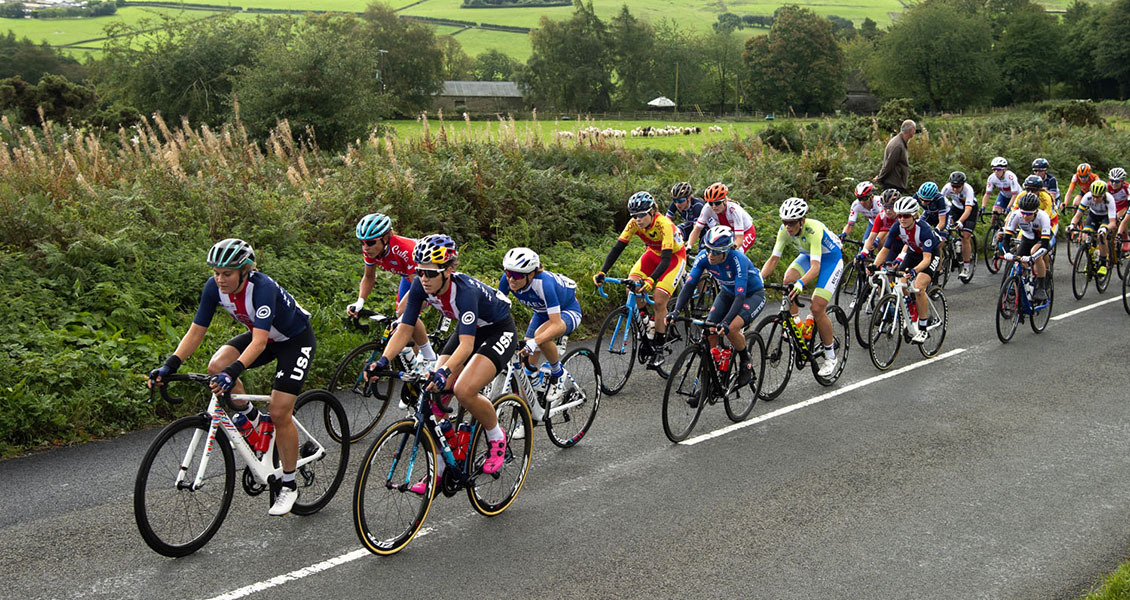 Yorkshire, U.K.- Chloe Dygert (Brownsburg, Ind.; Sho-Air TWENTY20) and Coryn Rivera (Newport Beach, Calif.; Team Sunweb) would bring the total count of top 10 finishes for the USA Cycling Road World Championships team to 12 with their fourth and tenth place finishes in Saturday’s Elite Women’s Road Race at the 2019 UCI Road World Championships. The National Team has also earned a total of six medals so far, the most medals earned in a World Championships held outside of the U.S.

USA Cycling fielded a squad of seven riders comprised of Dygert, Rivera, Ruth Winder (Lafayette, Calif.; Trek-Segafredo), Leigh Ann Ganzar (Austin, Texas; Hagens Berman-Supermint), Tayler Wiles (Fairfax, Calif.; Trek-Segafredo), Leah Thomas (Santa Clara, Calif.; Bigla Pro Cycling), Katharine Hall (Saratoga, Calif.; Boels-Dolmans). A surprise early attack from the Dutch rider Annemiek van Vleuten would be the move of the day. Dygert would be part of a group of seven riders, including defending World Champion Anna van der Breggen, to go after the ultimate winner. The remaining six riders of Team USA would work together to control the front of the peloton to allow the Dygert and the rest of the chase group time to work.

The chase group would work collectively for the first 60 kilometers, but Dygert would attack, again and again, trying to shake up the group of 7 riders.  It was Dygert’s third attack that proved to be the most lasting for her, where she was able to cut the time gap between her and van Vleuten by over a minute in less than 10 kilometers.

“When I took off for that last time, I knew I wanted to get out front and give myself a shot at the gold. I felt good and I was hoping I could bring down the gap but it just wasn’t the day,” said Dygert. “My mentality was go for gold or bust. I missed the podium today but I’m happy to have left it all out on the course.”

Rivera would stay active at the front of the peloton, and would ultimately claim fifth in the field sprint and place tenth overall.

“The race today was unprecedented with VanVlueten staying away. Chloe raced as smart as she could have and showed an immense amount of courage,” said Ina Teutenberg, USA Cycling's Director of Women's Road Cycling, “She raced to win and left everything out on the course. You can’t ask for more than that, especially as a 22-year-old in your first Elite World Championships. One rainbow jersey and fourth place performance is something she should be proud of. I know that we are.”

Racing concludes tomorrow with the Elite Men’s Race which will be streaming on the Olympic Channel and NBC Sports Gold starting at 1:40am MT.