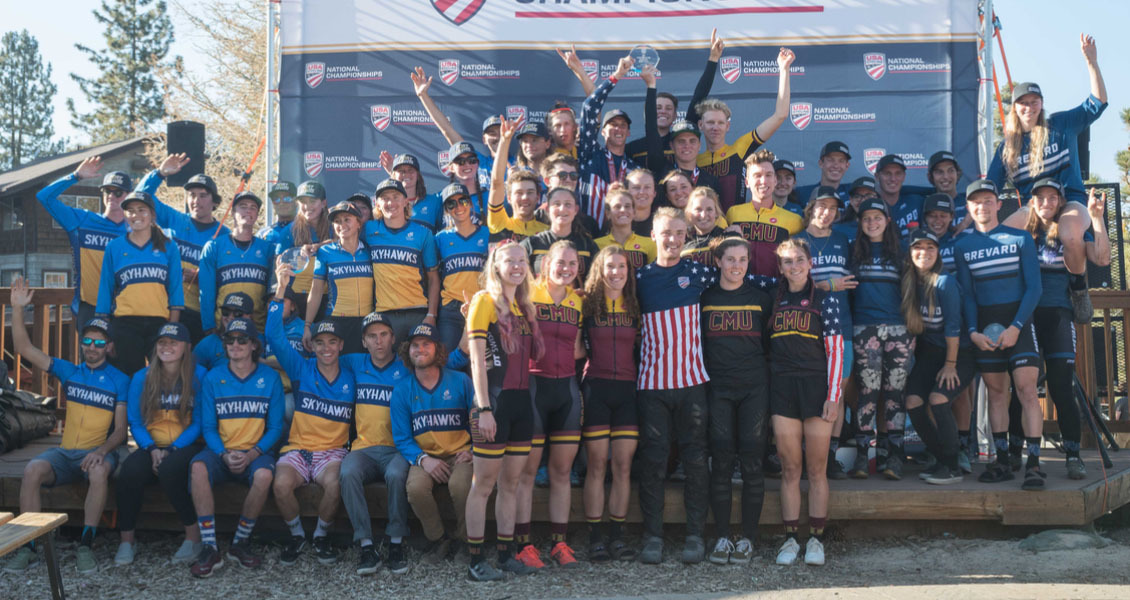 Sunday morning, the teams finally raced in the Downhill Finals on the tough and technical course. Saturday's seeding runs determined the starting order for racing.

All the pressure is on when it comes to the last event of the weekend, the Team Relay. This is a crucial event for teams to grab their final points towards the overall omnium. Each college puts together a team where a man and a woman each do two laps. Most teams have two men and two women if the roster allows. Every teams relay strategy is different making the racing extremely tight with leaders changing every lap.

In the Varsity race, Fort Lewis College has won the team relay for the past few years and becomes victorious once again. The team consisted of Henry Nadell, Ellen Campbell, Savilia Blunk, and Cole Paton. Brevard College finishes only 6 seconds behind with the team of Tyler Clark, Carson Beckett, Emma Schwab, and Hannah Arensman. Colorado Mesa University comes in third with a time difference of 12 seconds. The team was represented by Daxton Mock, Lauren Lackman, Katie Clouse, and Torbjorn Roed.

In the Club race, the University of Colorado Boulder won their fourth team relay in a row with a team of Alexander Sugarman, Reade Warner, Harper Powell, and Molly Madden. Colorado School of Mines takes silver with Ian Blythe, Laura Leonard, Gabriella Dube, and Jack Doherty. The US Air Force Academy was not far behind taking the bronze with Daniell Willett, McKenzie Steiner, and Jason Muff.

In addition to the Team Omnium, student-athletes also have the opportunity to compete in an Individual Omnium. Racers must compete in at least 3 out of the 4 disciplines and the racer with the most points wins. Congratulations to Clark, Blythe, Blunk, and Anders on their Individual Omnium National Titles.

After a long weekend, the team omniums were finally decided after the completion of all 9 events. Colorado Mesa University won taking the Varsity title from Fort Lewis College. There was only a 4 point difference between the two teams. Brevard College took the last step on the podium.

The club category is broken down into two divisions. In D1, the University of Colorado Boulder almost kept a perfect score until the Men's Downhill race where they placed second. With several team wins under their belt from previous years, CU Boulder adds another title to the collection with 712 points. Colorado State University ended up in second with 565 points and Cal Poly SLO finished 67 points behind. In D2, the Colorado School of Mines wins with US Air Force Academy in second, and University of Denver in third.

It was a great weekend of racing for all the colleges. Next up on the Collegiate National Championship calendar is Cyclocross Nationals December 12-13 in Lakewood, WA.