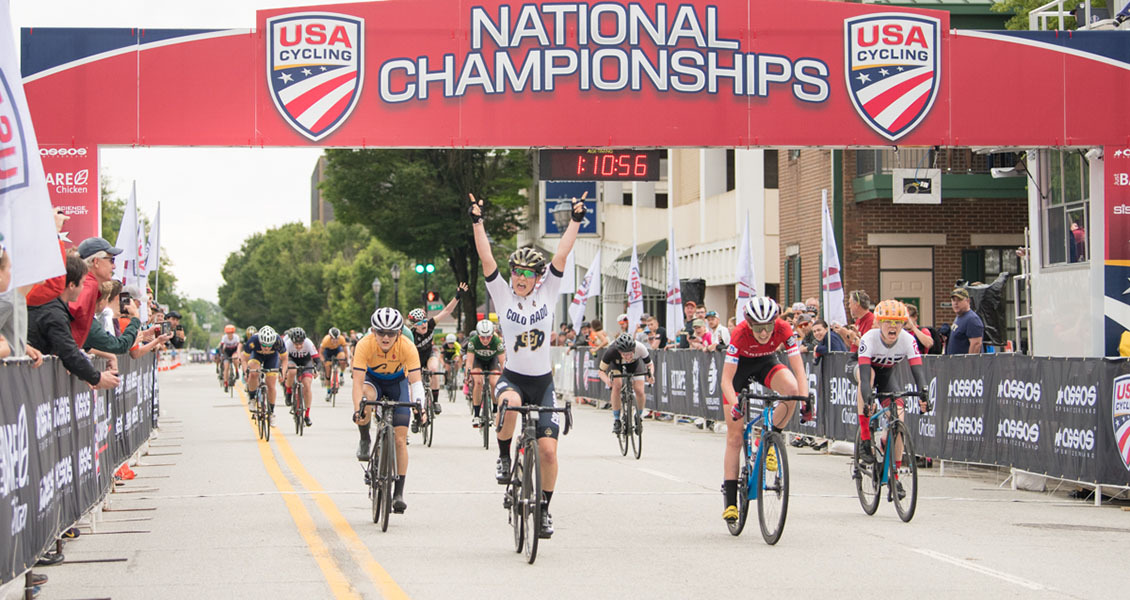 Marian University, University of Colorado Boulder, Massachusetts Institute of Technology, and Savannah College of Art & Design come away with titles.

AUGUSTA, GA. — Speed and precision were on display in downtown Augusta on Sunday for the final day of the 2019 USA Cycling Collegiate Road National Championships. Four criterium events decided new national champions for Varsity and Club athletes representing 79 schools from across the country. Accumulated points from three days of racing decided Omnium winners for individuals and teams.

A 1.4-kilometer (0.86-mile) circuit was used for all criterium events, using a four-block section of downtown to circle Augusta Commons. Women raced for 70 minutes, with the Club division starting at 9 a.m. and Varsity division at 10:30 a.m. For the men, champions were decided after 80 minutes of racing, with the Club division taking place at 12:15 p.m. followed by the Varsity division.

In the final seven laps and with the main field of 32 riders still together, there was a different lead-out rider on each lap trying to create some space. In the final sprint, Christian surged to the front and created enough distance on O’Neill for the gold. O’Neill took the silver, followed by Samantha Quijano (Morgan Hill, Calif./University of California-Berkeley) snaring the bronze.

“We (UC Boulder) working together as a team, pulling out everything we had, throwing every wrench we could. We knew exactly what we needed to do, because we were talking the entire race,” said Christian about her win being a result of solid teamwork for all 70 minutes. “It’s a huge thing to come to nationals, whether you are a big team or a small team. Whether you have a lot of teammates here or not, it means a lot that this was a really good, clean race among all the riders.”

The Varsity contest resembled a grand prix motorsports event. After four laps and the first prime competition, there was a large pileup on turn six, which caused a 30-minute delay for the field of 48 riders. Rain showers added treachery to the mix, resulting not long after with a second crash. After the race was neutralized for a few minutes and neutral laps reorganized the field, it was full speed ahead. Marian University used multiple riders to lift the pace, as well as Milligan College, Lindenwood University and Savannah School of Art & Design, both the Atlanta and Savannah squads.

Not until the final 200 meters did a familiar face and SCAD jersey emerge for a third national title. Olivia Ray (Auckland, NZL/Savannah College of Art and Design-Savannah) made it three-for-three for the weekend, winning the criterium. The same time went to seven other riders in the bunch sprint, with the silver going to Alijah Beatty (Washington, Iowa/Marian University). The bronze went to Judah Sencenbaugh (Toccoa, Ga./Savannah College of Art and Design-Atlanta), who was the silver medalist last year.

“I was just hoping to get a good wheel, and Alijah went to go for the line. So I gave everything to catch her and crossed the line first,” said Ray about how she emerged from the pack to take her third collegiate road title in three days. She won the Individual Time Trial on Friday and the Road Race on Saturday.

Ray would also secure the Individual Omnium for Varsity Women. Madeline Bemis (Corona, Calif./Milligan College), the silver medalist in the Road Race and fifth in the Criterium, took second overall in Omnium points. Samantha Runnels (Austin, Texas/Lindenwood University), the bronze medalist in the Road Race and sixth place finisher in the Criterium, was third overall in Omnium points.

Brunner saved a little in the tank for the final sprint and won the gold, in a time of 1 hour, 16 minutes, 25 seconds. One second back was Moavenzadeh for the silver, and Call rolled in two seconds back for the bronze. Hartner would finish fourth, and the best of field was Keelan Ontiveros (Portland, Ore./University of Oregon).

“I didn’t expect to win today. I just go into every race and try to win,” Brunner said, who also took the Individual Omnium title for Club Men, 237 total points. Last year he was second in Omnium standings. Call finished second with 229 points, just edging out Road Race champion Evan Bausbacher (Richardson, Texas/University of Texas at Austin) by two points.

The Men’s Varsity Division faced more spring showers in the afternoon and hit the circuits hard for the full 80 minutes. Attacks came from multiple schools, with 21 riders sorting themselves from the original 68. The final sprint for gold went to James Hilyer (Durango, Colo./Fort Lewis College). Five other riders finished with the same time, and from that group Scott McGill (Fallston, Md./Brevard College) earned the silver. The bronze went to Hugo Scala Jr. (Dallas, Texas/Marian University).

“It was unexpected, especially after hitting the deck at 65 k (kilometers) an hour yesterday. And riding a borrowed bike. I didn’t think I was going to do anything today,” said a smiling Hilyer after the race. “Coming down the backside, I got in front of Marian. As soon as I did that, and was on Scott McGill’s wheel, I was like, ‘that’s it, I’m not letting this go.’ I realized I was right there, coming around the last two people. I thought, okay, I could finish this off, this is easy.”

The Omnium points for teams are determined from all three days of racing. In the Club

Division I contest; University of Colorado Boulder earned the gold with 480 total points. Finishing second was Colorado State University 386 points. Stanford University secured third with 365 points. In the Club Division II, Massachusetts Institute of Technology came away victorious with 307 points. Taking home the silver was Dartmouth College with 202 points. And rounding out the podium with 153 points was the US Air Force Academy.

In the Varsity Division I Team Omnium standings, Marian University held its lead and took gold with 542 total points. Milligan College followed in second with 389 points, edging Colorado Mesa University, which scored 380 points. For Varsity Division II, Savannah College of Art and Design – Savannah climbed to the top stop of the podium with 253 points. Piedmont College would follow for silver with 221 points. Following closely for third, Belmont Abbey College would score 180 points.

For results for all three days of the 2019 USA Cycling Collegiate Road National Championships - click here. Omnium standings can be found online.